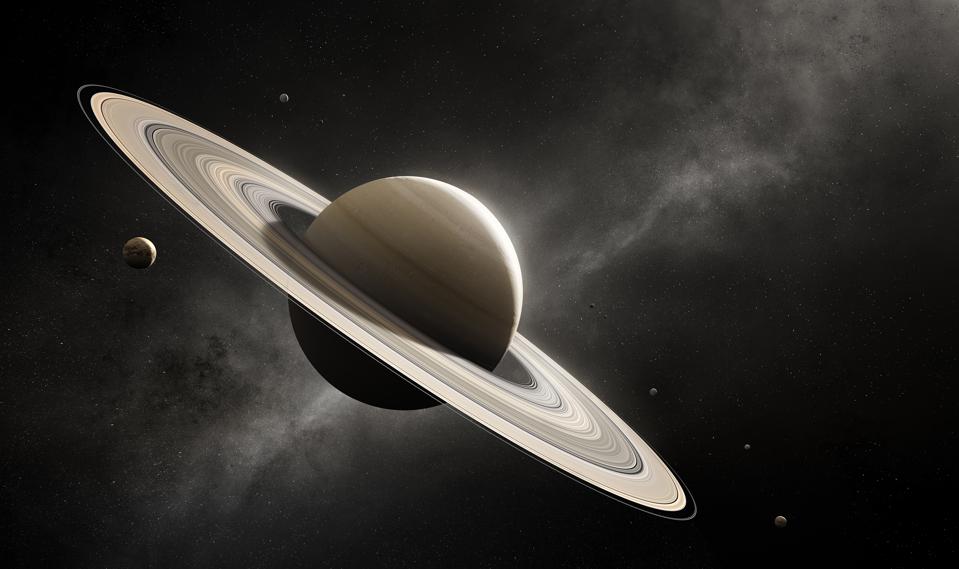 A recent French study showed that the impact of Saturn’s moons could explain the tilt of its axis of rotation around itself, an axis that was stable a billion years ago. It also predicted that the tilt of Saturn would increase further over the next billions of years.

This came in the study published in the journal Nature Astronomy on January 18, by two scientists from the CNRS and the Sorbonne University working at the Institute of Celestial Mechanics And the calculation of the astronomical calendar (Paris Observatory).

Saturn’s orbit around the sun

It is known that Saturn is the sixth planet in terms of distance from the sun, and it is the second largest planet in the solar system after Jupiter, and it is classified among the gas planets such as Jupiter, Uranus and Neptune.

Saturn is characterized by 9 rings of ice and dust that revolve around it in one plane, which gives it a distinct shape, as it is followed by 61 known moons orbiting Saturn as well as small moons, 53 of which have been officially named.

Titan is a major reason

Until recently, the prevailing theory in explaining the increase in the inclination of Saturn’s axis of rotation was that this occurred as a result of a change in the orbit of Neptune about 4 billion years ago, but the recent study has shown that the reason for this increase in this tilt was due to the moons of Saturn.

According to the press release issued by the French National Center for Scientific Research, the study found that Saturn’s moons are moving away faster than previously thought, and by adding this increased migration rate to the new calculations, the researchers determined that this causes the planet to tilt more and more, and that this will double In a few billion years.

The statement adds, that calculations show that only about a billion years ago, the moon Titan raised a resonance phenomenon that led to the interaction of the axis of Saturn with the path of Neptune, and the inclination of Saturn gradually increased until it reached the tilt observed today, which shows that the current tilt of Saturn’s axis of rotation is caused by the migration of its moons , Especially due to the migration of its largest moon, Titan.

The statement confirmed that the largest moon of Saturn, “Titan”, is moving 100 times faster, and is believed to have formed 4.5 billion years ago. As Titan moves, it pulls Saturn further and further toward the tilt.

the analysis apply to Jupiter too

The conclusions reached from the observation and analysis of Saturn may also apply to Jupiter.

As its axis of rotation is expected to undergo a similar incremental tilt due to the migration of its four main moons and their resonance with the orbit of Uranus over the next five billion years, at which time the tilt of Jupiter’s axis increases from 3 degrees to more than 30 degrees.