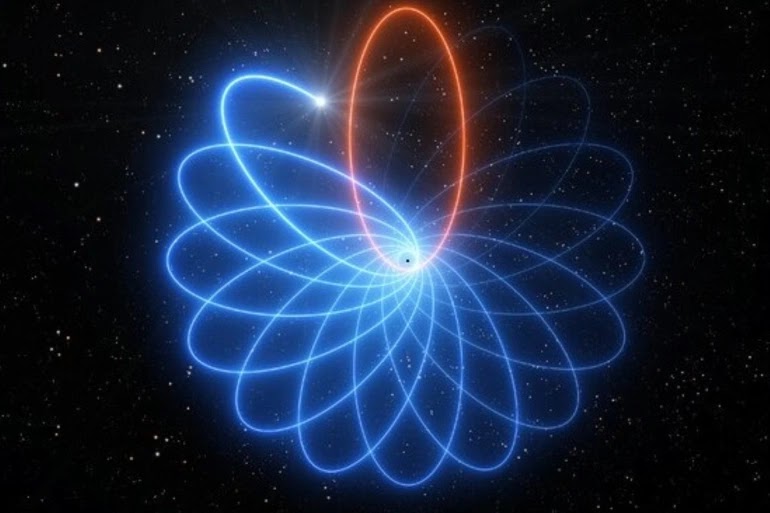 Researchers from a joint European team announced that they were able to prove the validity of Albert Einstein’s general theory of relativity after examining the shape of a star’s orbit around the giant black hole located at the center of our galaxy, “the Milky Way,” in a first of its kind.

According to the new study, published on April 16 in the journal “Astronomical and Astrophysics”, it was possible for the “very large telescope” (VLI) of the European Space Agency to reach these results after studying the orbit of this Star S2 More than 330 times in half a century.

“S2” represents an ideal case for astronomers, as it orbits around the giant black hole “Sagittarius A *” approximately once every 16 years, which is a short period by astronomical standards. For this reason, the star was the focus of scientists’ attention since the 90s of the last century.

Albert Einstein had published his general theory of relativity in 1915, which indicates that the orbits of celestial bodies are not fixed as suggested by the laws of Isaac Newton, which continued to dominate the world of physics for more than two hundred years, but shifted to a very small extent every period.

In fact, one of the most important confirmations of the validity of the relativity theory was the observation of this very slight shift in the orbit of the planet Mercury around the sun, and that was one of the baffling questions for a very long time, and the French astronomer and mathematician in the 18th century, Urbain Le Verrier, believed that a planet called “Vulcan” is the reason for this.

In spite of this, scientists had to confirm the correctness of the theory of relativity in all circumstances, whether it is moderate such as the rotation of a planet around a star, or in the most severe astronomical conditions, including the rotation of objects around black holes and neutron stars.

According to the new study, this precise alignment between their observation of the orbit of the star “S2” and the mathematical predictions of the general theory of relativity is a good starting point for more in-depth future steps to understand the origins of the giant black hole at the heart of our galaxy, and thus the development of the galaxy itself.

The research team hopes that a promising new project called the European Extremely Large Telescope will help develop our understanding of these ranges better, as well as explore one of the most important secrets of physics to date, which is dark matter.

The construction of the telescope has already begun in 2014 in the northern Atacama desert in Chile, and is expected to begin work in 2025, at which point it will be the largest reflecting telescope on the surface of the Earth with a 39-meter-diameter mirror, making it more than ten times larger than the current ground-based telescopes.