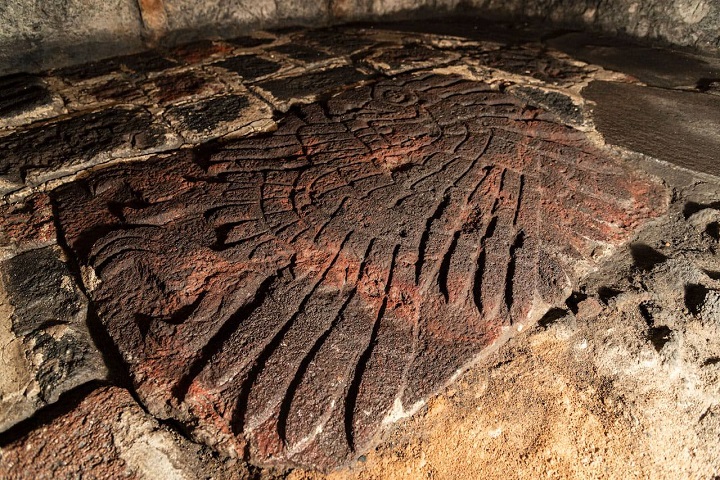 Archaeologists from the Mexican National Institute of Anthropology and History (INAH) announced the discovery of an amazing 600-year-old Aztec sculpture depicting a golden eagle in an ancient temple in Mexico.

The Eagle, which measures 106 cm x 70 cm, is the largest statue ever carved in the temple.

The eagle is carved into the floor of a building at the foot of the Templo Mayor, the iconic pyramid-shaped temple that was built in the heart of Tenochtitlan, the ancient Aztec capital, and is now in modern Mexico City.

The bas-relief, a type of sculpture with images carved from a stone background, was created by artists in the mid-fifteenth century during the reign of Moctezuma I.

Archaeologists from the Mexican National Institute of Anthropology and History discovered the inscription in February 2020 as part of the ninth season of the Templo Mayor Project, an ongoing excavation of the sacred site.

“It is a very beautiful piece that shows the great secrets that Templo Mayor did not reveal to us in Mexico. Thanks to the efforts and dedication of archaeologists, we can continue to restore our history and our memory,” Alejandra Frausto Guerrero, Mexican Minister of Culture, said in a statement.

Templo Mayor, also known as the Great Temple, was a huge pyramidal structure located in the center of Tenochtitlan which was the heart of the Aztec religion and culture. At its top were two chapels dedicated to Heitzelobuchtli, god of the sun and war, and also the patron of the city, and the rain god Tlaluk. The temple was one of 78 buildings that made up the sacred area of ​​Tenukitlan.

The Aztec leader Itzcoatl, who ruled between 1427 and 1440, built the temple for the first time at the beginning of the fifteenth century. Subsequent rulers Moctezuma I (who ruled from 1440 to 1469) and Ahwitzutel (who ruled from 1486 to 1502) made significant contributions to the temple.

The prominent eagle sculpture fell into the floor of a building adjacent to Templo Mayor and was covered by another floor over which it was built during the reign of Ahuítzotl.

“This is why it is in a good state of preservation. It is an element that the Spaniards have never seen,” said Rodolfo Aguilar Tapia, the archaeologist at the institute who led the investigation.

Today, the stunning eagle statue sits under the intersection of two streets in Mexico City.

However, when it was built, the structure would have seated at the base of the south slope of Templo Mayor Temple. It would also have been on the central axis, a line connecting the Huiszelubuchtli chapel at the top of Templo Mayor and a gigantic statue of his sister, the goddess Koiulksawke, at the bottom.

The golden eagle (Aquila chrysaetos), also known as “itzcuauhtli,” or volcanic eagle, in Nahuatl language spoken by the indigenous people of central Mexico, was an important symbol in Aztec culture.

According to historian Pinnock: “The eagle was a sacred creature in Aztec thought, and it is believed that it was present at the birth of the sun (hence, the black edges of the wing appeared) and was a symbol of one of the orders of elite warriors in Aztec culture.