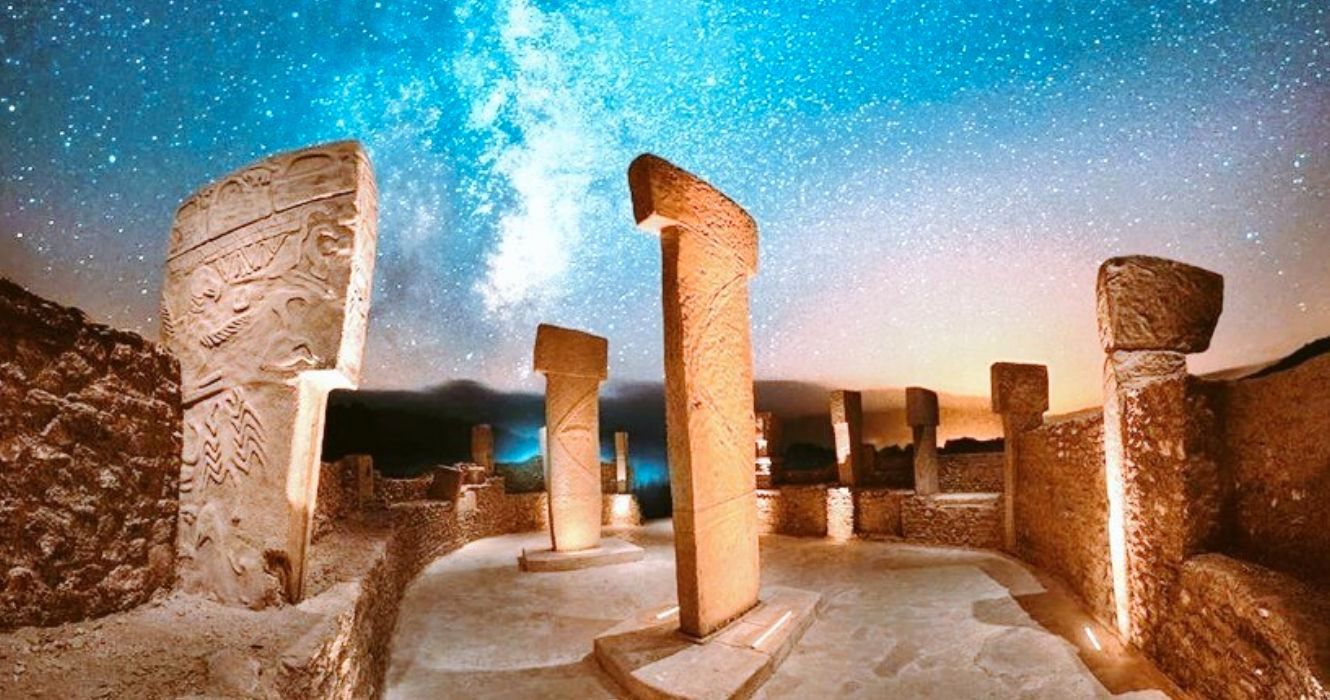 The ancient Göbekli Tepe temple represents a challenge to archaeologists and human history, as it was built during the period when humans lived hunting, traveling and gathering fruits before agriculture and the beginning of urbanization.

Traditionally, the narration of ancient human history begins by saying that agriculture led to stability, then the emergence of ancient cities, then the development of writing and art, and civilization arose from the inspiration of the human quest for worship, but the oldest temple discovered in the world so far may change all the arrangement that archaeologists used to narrate.

Before history and mining, before the settlement of humans and the invention of writing and the wheel, and before the construction of the pyramids of Egypt and the British Stonehenge by more than 7000 years, an unknown group of people built a temple of compact stones in the north of the Euphrates island and the peak of the Fertile Crescent, and this structure remained buried in Gobekli Hill on the outskirts of the city Urfa, southeastern modern-day Turkey, about 12,000 years ago, or 11,000 years ago. 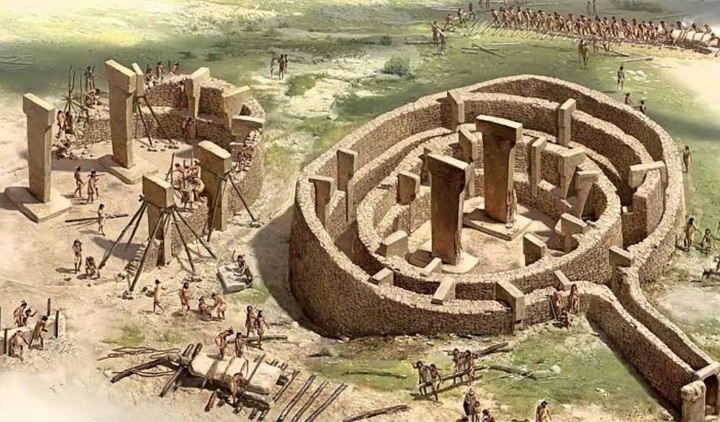 Observing the site for the first time began with a survey conducted by Istanbul University and the University of Chicago in 1963, and researchers discovered stone pieces they thought were Byzantine tombstones, but the excavation efforts carried out by the German archaeologist Klaus Schmidt with a Turkish and German team in the mid-nineties of the last century set a time The temple using carbon, and subsequently discovered huge prehistoric columns on the letter “T”, which resulted in a tremendous debate among archaeologists, who were puzzled by the discovery of a structure that challenges what they used to describe people of that ancient era with a lifestyle of hunting, wandering and gathering fruits. With a primitive community structure, could all these huge stone circles be built on top of a hill ?!

The ancient temple is the oldest temple built by humans since the Neolithic period (pre-Pottery), a time when archaeologists and ancient history agreed to link it to the so-called “agricultural revolution” in the Middle East, where humans began to domesticate animals, cultivate plants and shift to a life of stability. In the Levant and Mesopotamia, the first domesticated agricultural crops appeared in this particular region, according to the researchers.

Despite the many mysteries surrounding the site, only a few of them were revealed as the excavation continued and it became clear that the site was built in stages and steadily, and with the passage of time the columns and newer circles became smaller and simpler and were installed in less professional ways until about the year 8200 BC, however archaeologists and excavators did not find Any sign of housing, old houses, or even places of residence for workers, as they have not reached any source of water nearby. 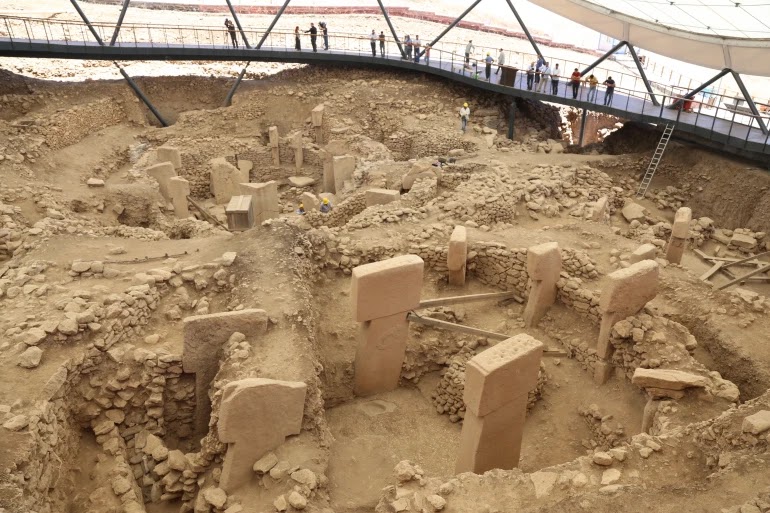 The temple consists of layers that were built over many centuries of architectural activity, which began at least early in the Paleolithic period on a flat and arid plateau, and parts of the construction are spread in all directions and near steep slopes, and the excavation team found on the site many tools used in A geometric pattern consists of circles that form an equilateral triangle.

An alternative theory of the emergence of civilization

The traditional idea that scientists were acquainted with was that when hunters settled and pickers settled and began cultivating crops, the surplus food provided humans with opportunities to organize complex and more advanced societies, but the German archaeologist who led the excavation at the site provided an opposite explanation (before his death in 2014), as I consider that the manpower working to build the ancient temple is what may have pushed humanity to develop stable agriculture as a way to provide food in an organized way, otherwise how could those who built this ancient temple gather to carve and transport huge stones without having enough food and drink to meet their needs .

And also the importance of the huge architectural buildings discovered in the fact that they represent evidence that the nomadic people who lived as hunters had the ability to construct large buildings not for housing but for worship, and the German researcher who headed the discovery team at the archaeological site expressed that by saying, “The temple was built first and then built. City”.

The paradox that baffled scientists is that the construction of this huge temple required a large number of people to meet in one place, which is inconsistent with the lifestyle of hunting wild animals, wandering, wandering and searching for plants that the scientists assume characterizes this period of time, and in addition to that the building It required cutting, shaping and moving huge stones for a not short distance, and that was before the age of metal adaptation, the invention of the wheel, and the discovery of writing and pottery, which represents a new mystery and additional confusion.

The Temple of Death

Schmidt assumes that the temple was used for rituals and rituals associated with death, while it is believed that inscriptions and animal drawings were used as a talisman to protect the dead, and although no graves were found on the site, botanists suggested that this area of ​​the Euphrates island and the peak of the Fertile Crescent was where cultivation began. The domesticated plants and the associated transformation of the life of stability and ancient urbanization.

The importance of “Gobekli Tepe” is highlighted in that it poses a tremendous challenge to the traditional view of the rise of ancient civilization, taking into account the estimation of archaeological prospectors that their work has revealed only about 5% of the temple and the archaeological site so far.

Scientists discovered at the site about 43 stone columns or tombstones in the shape of the letter “T” of soft limestone, reaching a height of about 18 feet and weighing between 16 tons and 40 or 60 tons, and scientists assume that they are abstract images of the human form.

The stones were transported from a stone quarry in the slope down the hill, and although some of the stones used in the construction are not engraved, others display unusual artworks in the form of elaborately carved animals, including foxes, lions, bulls, scorpions, snakes, birds and insects, and there are also abstract shapes. And a depiction of an unknown woman, and some archaeologists assume that some of the images may represent a form of primitive writing or contain sacred symbols whose meanings were understandable to the inhabitants of the region in ancient times.

Stone structures, stone elements, decorative engravings, and craftsmanship provide a rich insight into the lives of the communities that lived through the site’s construction.