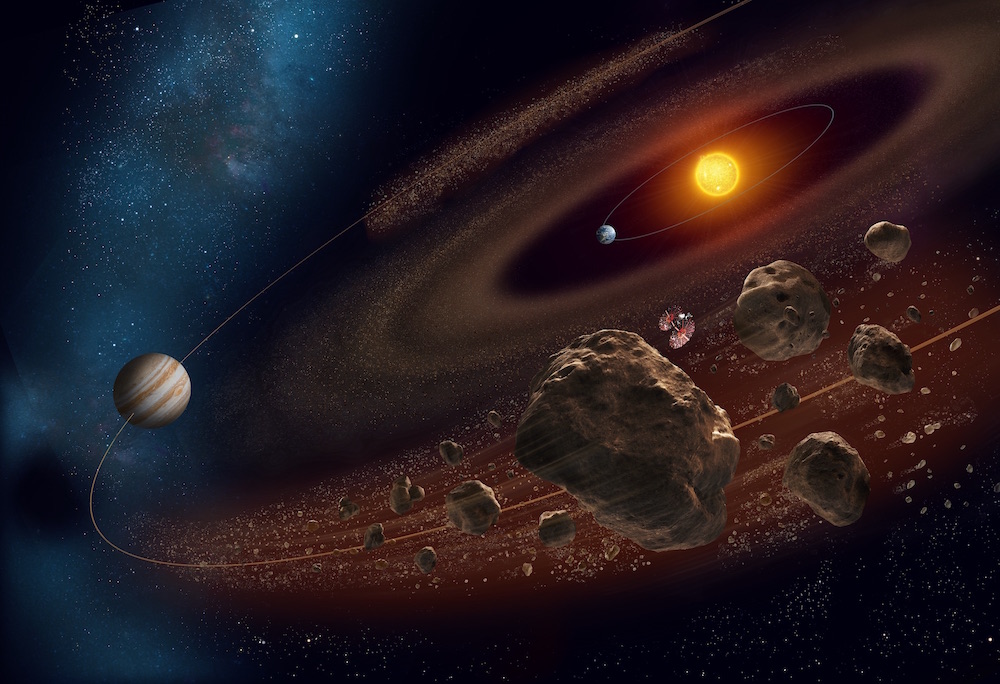 In October of this year, NASA aspires to start a new journey to explore the origins of the solar system, by launching its promising mission, “Lucy”, which begins a 12-year journey to study 7 asteroids Trojans.

We know that asteroids are found in two main regions in the solar system, the first being the asteroid belt between Mars and Jupiter, and the other being the Kuiper belt behind Neptune, but this does not prevent them from being in separate regions of the solar system.

But the most important and densest of these scattered groups of asteroids are two groups orbiting Jupiter, one in front of it and the other behind it.

The bodies of the Trojans are gathered around the so-called “Lagrange Points”, which are two mathematical points located in front and behind Jupiter at the same distance from the sun and from Jupiter, and the reason for their standing in those places specifically is the equal effects of gravity in them between the sun and Jupiter, so do not be attracted to this or You push because of that.

NASA scientists believe that these objects were more than 4.5 billion years ago part of the process of planetary formation, where these small pieces come together one by one to fuse together, and then in the end the planet is made that takes a spherical shape with time due to its own gravity.

For this reason, NASA researchers are interested in the Trojan asteroids, as they may help them uncover important secrets about the history of the solar system or the history of life in it.

We now know that there are more than 6 thousand of these objects orbiting Jupiter in its orbit, as well as 4 of them orbit in the orbit of Mars, and 28 revolve around Neptune, and of course these numbers do not reflect the real number of objects, they are only what scientists have observed.

As for the Earth, it has its own Trojans as well, the first of which is confirmed, and scientists have spotted it in 2010 and it was called 2010 TK7K, while the other was spotted in November and December last around the Earth, and it is called 2020 XL5, but it requires further study of its orbit, to confirm that it is one of the Trojan objects that follow the Earth’s orbit in the sky.

It is certain that the Earth has in its orbit a larger group of these objects, but because it is so small, monitoring them is difficult, and it also does not represent a danger to us.