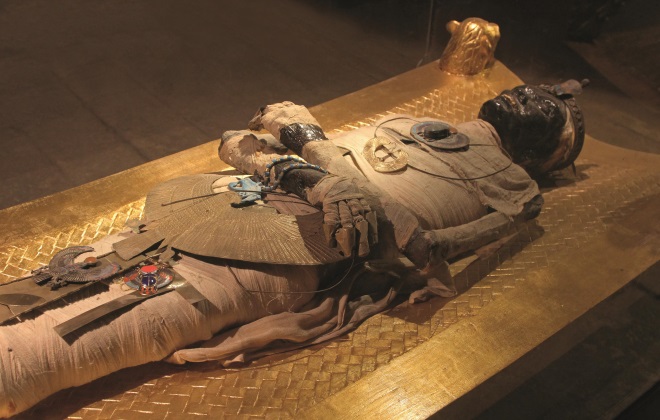 A specialized scientific journal reported that American scientists have discovered an unusual artifact inside a 2,000-year-old Egyptian mummy.

When examining a mummy using a synchrotron particle accelerator, experts were surprised to discover dozens of small artifacts, including a seven-millimeter-long artifact made of a mineral called calcite.

The curious artifact was found near the abdomen at the site of the incision through which the internal viscera was removed during embalming.

Experts say the piece is an amulet that was specially placed in this place to provide “spiritual protection” for the mummy.

Scientists assumed that the artifact found inside the mummy was in the form of a scarab beetle, which was a common form of amulets in ancient Egypt.

The team was also able to confirm that the mummy’s skeleton—which is just 94 centimeters long—belonged to a child about 5 years of age. That’s surprising, considering that the portrait painted on top of the mummy shows an adult woman. As such, the scientists say, the paintings may not always have been an accurate depiction of the dead individual inside. In this particular case, the image may represent how the child may have looked had she survived into adulthood.