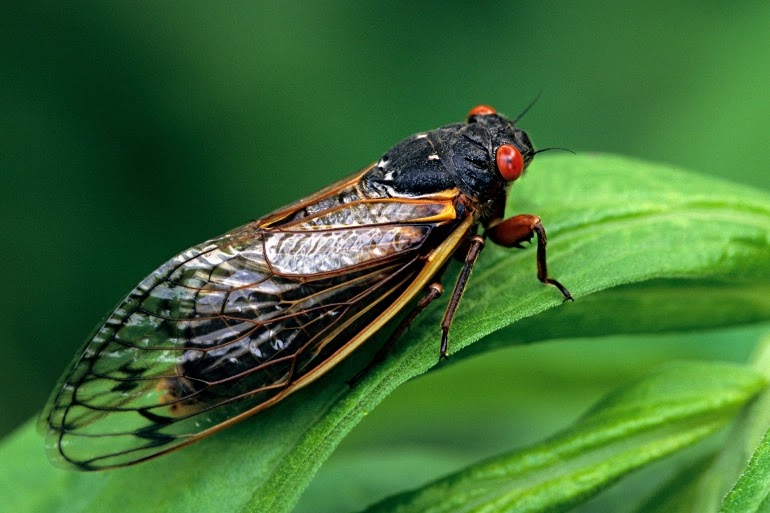 Starting sometime in April or May, depending on latitude, one of the largest broods of 17-year cicadas will emerge from underground in a dozen states, from New York west to Illinois and south into northern Georgia.

The scene is natural and exceptional at the same time, as the cicadas finally appear after they have spent 17 years patiently growing underground in complete darkness, so that their appearance in this scene – which is not seen anywhere else on Earth – is noisy and simultaneously for mating, ovulation, and then death.

A life in the dark

The cicada family belongs to the order Hemiptera, which includes more than 3 thousand species worldwide, as well as many unexplained species.

The cicada last appeared in the United States in 2004. It lives most of its life in the dark and feeds on the roots of plants under the surface of the earth until the time is right for them to go out to search for a partner. It can be predicted when they will appear simultaneously every 17 years in the northern United States, or 13 years south and in the Mississippi Valley.

Once the ground gets warm in late April and early May, billions of this insect – known as “Cicada nymphs” – make their way out from underground and up into trees, where they shed their exoskeleton one last time to become an adult insect.

Billions of these adult nymphs – known as the Brood X – are spread across 12 states stretching from Illinois in the west, to Georgia in the south, and all the way to New York in the northeast.

Once out, those billions have only a few weeks to sing, mate, and start a new cycle. In about 4 weeks, many forests are teeming with cicada whistles announcing the start of their mating season. Then the female lays hundreds of eggs on tree branches. Then all the adult insects die. After the eggs hatch, the new nymphs fall off the tree branches to shelter the surface of the earth again and begin a new cycle that lasts 17 years.

It is known that there are approximately 3 to 4 thousand species of this insect around the world. However, the rotating cicada nymphs are unique.

The cicada astonished scientists for a long time, which led them to ask why this insect survives 13 or 17 years under the surface of the earth, and what does it eat? And why do you coincide in these behaviors? 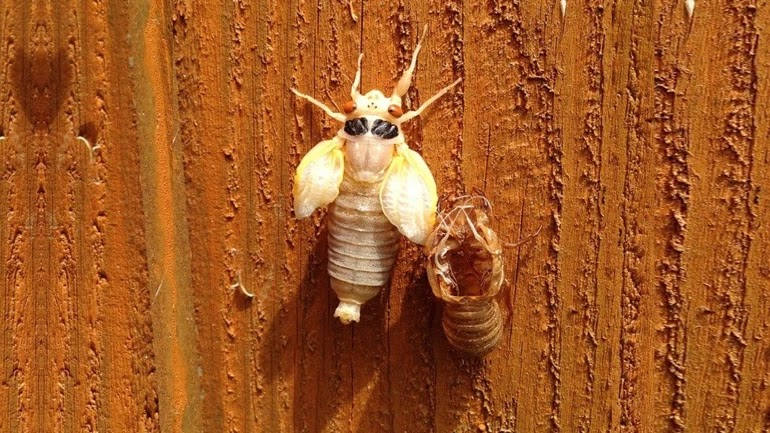 Although the periodic cicada appears every 13 or 17 years, limited groups may appear 4 years before or after that. They may be faster growing and have ample food, which helps them to appear early sometimes.

Huge numbers of billions of this insect will invade the earth’s surface. This increases the chance of its success in mating, and it will also give an opportunity for many of them to survive if some of them are preyed upon by snakes, bats, or any of the birds that feed on them.

The cicada is older than the forests in which it lives. Molecular analyzes show that the ancestors of this current magic insect split into two main lineages 4 million years ago. After about 1.5 million years, one of these two dynasties diverged again, resulting in the emergence of the three lineages that we know today.

According to the report published on the website “The Conversation”, America’s first colonists encountered periodic cicadas for the first time in Massachusetts, which recalled their biblical locust plagues. Thus, the name locust was incorrectly associated with the cicada insect in North America.

However, entomologists of the nineteenth century demonstrated that cicadas do not feed on leaves, do not perish crops, and do not fly in swarms like locusts do. Instead, this insect spend most of its life hidden from view, as it spends 5 juvenile stages of growing underground, relying on plant roots for its food.