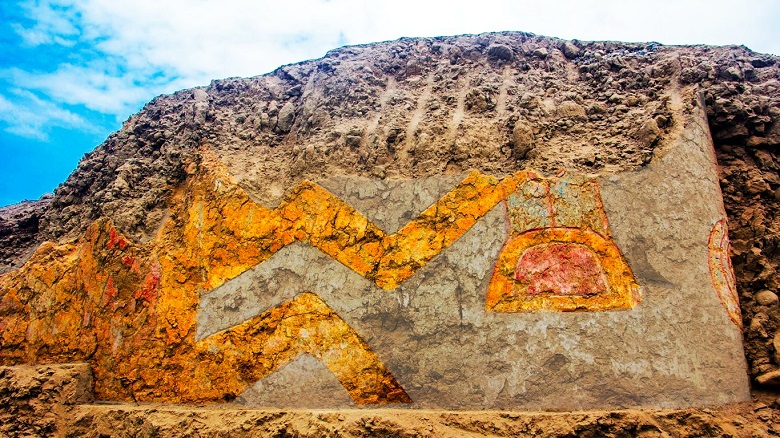 Archaeologists in northern Peru have identified a 3,200-year-old mural painted on the side of an ancient adobe temple that is thought to depict a zoomorphic, knife-wielding spider god associated with rain and fertility.

The mural – applied in ochre, yellow, grey and white paint to the wall of the 15m x 5m mud brick structure in the Virú province of Peru’s La Libertad region – was discovered last year after much of the site was destroyed by local farmers trying to extend their avocado and sugarcane plantations.

Experts believe the shrine was built by the pre-Columbian Cupisnique culture, which developed along Peru’s northern coast more than 3,000 years ago.

Archaeologist Régulo Franco Jordán said the shrine’s strategic location near the river led researchers to believe it was a temple dedicated to water deities.

“What we have here is a shrine that would have been a ceremonial centre thousands of years ago,” Jordán told La República newspaper.

“The spider on the shrine is associated with water and was an incredibly important animal in pre-Hispanic cultures, which lived according to a ceremonial calendar. It’s likely that there was a special, sacred water ceremony held between January and March when the rains came down from the higher areas.”

According to archaeologists, about 60 % of the landmark, located 500 kilometers north of Lima, was destroyed in November last year when farmers in the area used heavy machinery in an attempt to expand crop fields.

Jordán has named the temple Tomabalito after the nearby archaeological site known as el Castillo de Tomabal.

He told La República newspaper: “The site has been registered and the discovery will be covered up until the end of the Covid-19 pandemic, when it can then be properly investigated.”

The spider god was not the only ancient animal artwork to appear in Peru in recent months.

In October of last year, a giant cat, dating from between 200 BC and 100 BC, appeared while working to improve access to a hillside overlooking the geoglyphic lines of the country’s famous Nazca Line.

Archaeologists believe that the temple consists of at least three superimposed clay structures, as the second structure is the best preserved and the one that preserves the mural.

From the first structure, only a few conical adobe walls and floors remain. The characteristics of the third structure have not yet been determined.