A team of researchers at Tel Aviv University has achieved unprecedented technological and biological development in the world, by creating a biologically hybrid robot that “hears” through the ear of a dead locust.

For the first time, a dead locust ear was connected to a robot that receives electrical signals from the ear and responds accordingly.

And robots were able to hear sounds through a dead locust’s ear in the world’s first experiment using the Ear-on-a-Chip method to create a long-lasting sensory device.

The Tel Aviv University team announced the new Ear-bot, which replaces an electronic microphone in a bio-hybrid robot with the insect’s ear, allowing the machine to receive electrical signals from the surrounding environment and respond accordingly.

Although the experiment looks strange, the team conducted the test to understand how biological systems, especially sensory systems, could be integrated into mechanical systems. 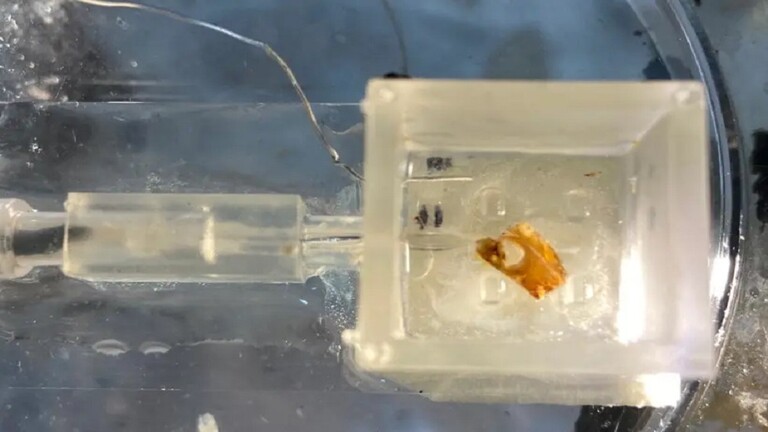 “We chose the sense of hearing, because it can be easily compared to existing technologies, in contrast to the sense of smell, for example, where the challenge is much greater,” says Dr. Maoz. “Our task was to replace the robot’s electronic microphone with a dead insect’s ear, use the ear’s ability to detect the electrical signals from the environment, in this case vibrations in the air, and, using a special chip, convert the insect input to that of the robot.”

Dr. Maoz and his team started by designing a robot that could receive signals from the environment and respond to them.

Then the team chose to use an adult desert locust ear, which was drugged with carbon dioxide, decapitated it, and amputated its wings and legs.

The ear was then excised by cutting it “with caution” and delineating it and severing the auditory nerve.

Over hundreds of millions of years of evolution, insects have developed ingeniously simple and sensitive sensors, which are small, lightweight, adaptable to very diverse environments, have low energy consumption, and outperform many artificial sensors, the study published in MDPI.

“These unique properties make these biological sensors very attractive for use in technological applications,” the researchers said.

To create Ear-on-a-Chip, the team placed the insect’s ear and nerves in an aqueous environment that allowed air and sound to flow through it.

This was connected to custom-made suction electrodes, resulting in a microfluidic chip that could be attached to the bio-hybrid robot.

The microfluidic chip replaced the robot’s regular microphone, resulting in what the researchers call an ear-bot, and the system responded to sounds as if it was still using the original mechanical microphone.

When the researcher clapped, the locust’s ear identified the sound and converted it into an electrical signal that was transmitted to the Electromagnetic Measurement System (EMS) and the Control and Signal Processing System (CSPS), which controls the robot’s movements according to the number of claps.

Biological systems expend negligible energy compared to electronic systems. They are miniature, and therefore also extremely economical and efficient. For the sake of comparison, a laptop consumes about 100 watts per hour, while the human brain consumes about 20 watts a day.

In addition, “Nature is much more advanced than we are, so we should use it,” urges Dr. Maoz. “The principle we have demonstrated can be used and applied to other senses, such as smell, sight and touch. For example, some animals have amazing abilities to detect explosives or drugs; the creation of a robot with a biological nose could help us preserve human life and identify criminals in a way that is not possible today. Some animals know how to detect diseases. Others can sense earthquakes. The sky is the limit.”