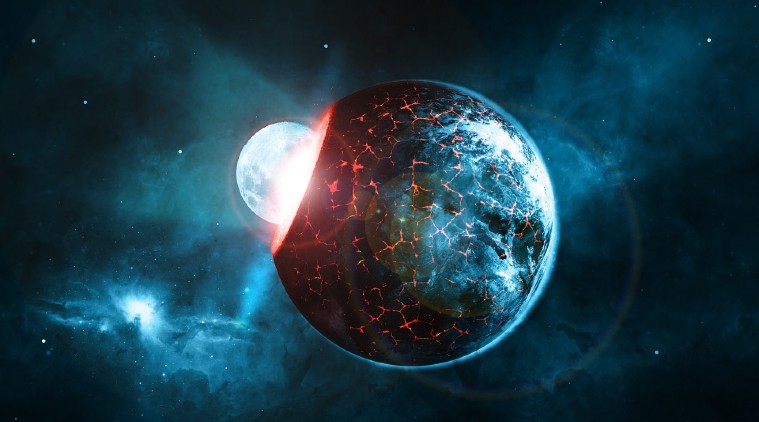 In a new study under review for publication in “Geophysical Research Letters”, scientists have come up with a new model that explains where the giant and mysterious masses of rock found in the depths of the lower parts of the mantle of planet Earth, which were observed with a seismic tomography, came from.

These anomalies are called “large low-shear-velocity provinces-LLSVPs”, and there are two of them, one buried under the African continent, the other under the Pacific Ocean. It is made up of dense rocks that are among the largest and strangest structures on Earth.

These anomalous structures are very massive and thus generate their own perturbations, such as the large phenomenon currently developing within the Earth’s magnetic field and weakening it, known as the South Atlantic anomaly.

What scientists know so far is that these giant rocks have been around for a very long time, as many believe that they were part of the Earth since before the hypothesis of the giant collision, which occurred between the planet Earth and the hypothetical planet, which is called “Theia” , And this collision gave birth to the moon.

According to this widely held theory, Theia, a planet the size of Mars, struck early Earth about 4.5 billion years ago, forming the moon from the scattered fragments resulting from the collision between the two planets. As for what happened to the rest of Theia, it is unknown and uncertain whether it was destroyed, or whether it has simply returned to deep space.

Some researchers suggest that the nuclei of these two primitive planets may have merged into a single planet, and that it was the chemical reactions resulting from this epic fusion that enabled life itself to flourish in the resulting world.

In the new study, conducted by researchers from Arizona State University, scientists concluded a new suggestion, which may answer mystery regarding LLSVPS structures, and the idea of ​​weaving them with the hypothesis of fusion of the two nuclei of both Planet Earth and the hypothetical planet Theia.

According to new modeling by the researchers, LLSVPS may represent ancient fragments of the extremely dense and iron-rich Theia mantle, which sank deep into the Earth’s mantle when the two developing planets came together, and were buried there for billions of years.

Qian Yuan, first author of the study who studies mantle dynamics at Arizona State University, explains in the summary of the research team’s findings, “The Giant Impact hypothesis is one of the most examined models for the formation of Moon, but direct evidence indicating the existence of the impactor Theia remains elusive.”

“We demonstrate that Theia’s mantle may be several percent intrinsically denser than Earth’s mantle, which enables the Theia mantle materials to sink to the Earth’s lowermost mantle and accumulate into thermochemical piles that may cause the seismically-observed LLSVPs.”

Despite previous speculation and for years that the giant “LLSVPS” rocks might be a strange souvenir that the hypothetical planet Theia implanted on our planet; However, the new research is the most comprehensive format so far.

The results of the research were presented at the 52nd Lunar and Planetary Science Conference-LPSC, which was held online from 15 to 21 March.