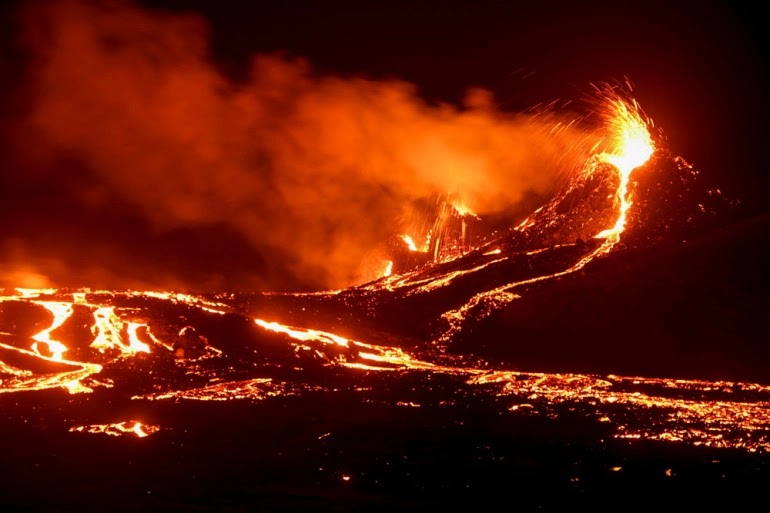 The Reykjanes peninsula, southwest of Iceland, witnessed the eruption of the volcano “Mount Vagradals” on Friday evening, after it remained dormant for about 6,000 years.

In a report published in the Washington Post, writer Miriam Berger says that the lava flowed about a kilometer, but it did not pose a threat to the residents of the surrounding areas.

According to the Associated Press, no volcano eruption has occurred in the Reykjanes Peninsula for 781 years, and the Icelandic Meteorological Office said in a statement that the Fagradals eruption was “light”, there is no need to evacuate the residents of the neighboring town.

“We ask people to keep away from the immediate area and stay safe.” tweeted Iceland’s prime minister, Katrín Jakobsdóttir.

Authorities additionally closed down roads in the vicinity and warned residents that “gas pollution” might affect the area. Icelandic authorities said air traffic could continue as normal and flights remained on schedule.

The Meteorological Department reported that the lava cut about one kilometer down the mountain, covering an area about half a kilometer wide, hours after the volcano erupted.

On February 24, the meteorological department had begun to record an increase in the number of daily earthquakes and other seismic activities on the peninsula.

According to the Associated Press, the scientists were surprised by the explosion, as they had noticed a slight decrease in seismic activity just before the eruption.

Related Topic: What would happen if the volcano in Yellowstone erupted?