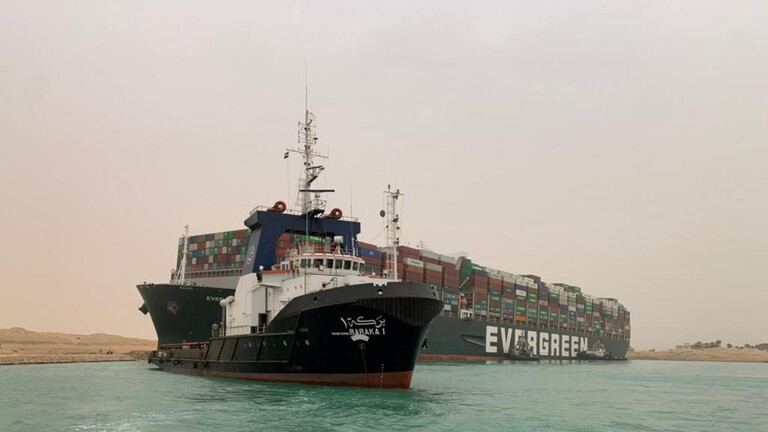 The owner and insurers of one of the world’s largest container ships stuck in the Suez Canal face claims totaling millions of dollars even if the ship is refloated quickly, industry sources said on Wednesday.

This comes at a time when efforts resumed today, Thursday, to float the giant ship (400 meters in length) whose strand led to the suspension of traffic in the Suez Canal.

The Suez Canal Authority said in a statement that the ship ”Ever Given” ran aground on Tuesday morning, which is mainly due to the lack of visibility resulting from bad weather conditions, due to the country’s passage through a dust storm, which led to the loss of the ability to steer the ship and blocking the movement of navigation in both directions in one of the busiest shipping lanes for goods, oil, grains and other products in the world, which connects Asia and Europe.

Insurance agents and brokers said that the Japanese company, “Shoei Kisen KK” – the owner of the ship – and insurance companies, may face claims from the Suez Canal Authority for lost revenue, and from other ships that have disrupted their movement.

“All roads lead to the ship,” said David Smith, director of the marine insurance brokerage office McGill and Partners, and Shoei Kisen KK could not be reached for comment. 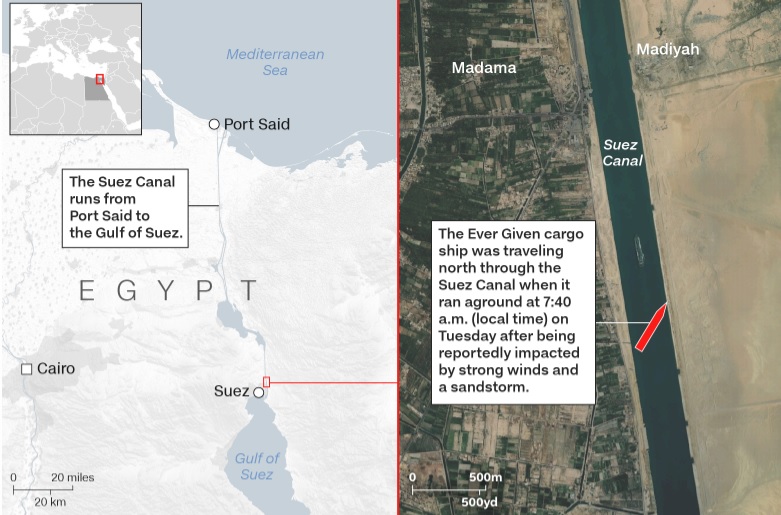 Container ships of this size are likely insured for hull and machinery damage of $100-140 million, insurance sources say. The ship was insured in the Japanese market, two of the sources said.

The cost of the salvage operation is also borne by the hull and machinery insurer.

“It is potentially the world’s biggest ever container ship disaster without a ship going bang,” one shipping lawyer, who declined to be named, said.

Martijn Schuttevaer, a spokesman for the Dutch maritime services company “Boskalis”, said that its ship rescue unit has been tasked with participating in the operation, and a team of about 10 individuals is heading to Egypt.

It is also likely that the owners of the ship’s cargo and other cargo stuck in the canal will claim compensation from the insuring company on the ship, for damages to perishable goods or delayed deliveries.

“If you have a constant build-up of ships, there are massive supply chain issues,” said Marcus Baker, global head, marine and cargo at insurance broker Marsh.

The British P&I Club said – in a statement to Reuters – that it is the protection and compensation authority for Evergiven, but it declined to provide further details, and this type of insurance covers claims related to pollution and human injuries.

Smith of McGill said that the bulk of these insurance claims are likely to be reinsured through a program run by the Global Protection and Compensation Clubs Group.

Local sources said that there are at least 30 ships stuck to the north of Evergreen, and 3 ships to the south, and there may be dozens of ships also parked at the northern and southern entrances to the canal.

The “Kepler” data analysis company said that the disruptions affect more than 20 tankers loaded with crude oil and refined products. Rahul Khanna, director of marine risk advisory at Allianz Global Corporate & Specialty, said there could also be claims for damages to the canal.