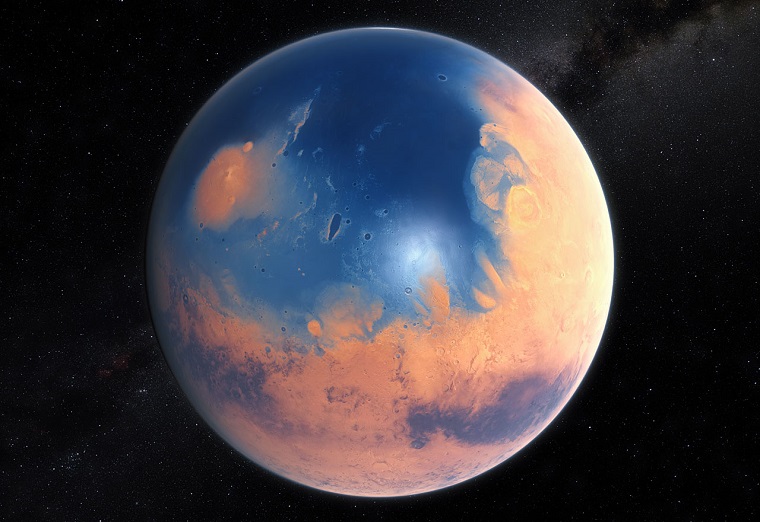 Scientists at Caltech and NASA’s Jet Propulsion Laboratory (JPL) have reached a new hypothesis regarding the question of the fate of water on Mars, by analyzing the planet’s atmosphere and the rocks record in NASA’s data system, which was obtained On it from Mars probes and satellites orbiting planets.

The hypothesis holds that large quantities of Mars water, estimated between 30% and 99%, have been trapped within the minerals in the Martian crust for billions of years, and have not seeped into the atmosphere as long ago believed. The results of this study were published in the journal Science in its March 16 issue.

The Red Planet was more blue

According to the press release issued by the California Institute of Technology, and according to the evidence that still exists on the surface of Mars, billions of years ago, the Red Planet was more blue, as abundant water flowed into it and formed ponds and deep oceans.

According to previous NASA research, Mars, about 4 billion years ago, was home to enough water to cover the entire planet in an ocean depth ranging between 100 and 1500 meters, which is roughly equivalent to the size of half of the Earth’s Atlantic Ocean, but after a billion years, the planet became as dry as it is today.

Previously, scientists would explain what happened to the flowing water on Mars, that it was lost in space by infiltrating through the upper atmosphere, as a result of the loss of Mars’ magnetic field early in its history, and thus its atmosphere was gradually stripped.

Although some of the water did leave Mars in this way, but as it appears now, this escape cannot explain the disappearance of most of the water.

The data and simulations also indicated that the water was almost all gone by three billion years ago, around the time on Earth when life consisted of single-cell microbes in the oceans.

“This means that Mars has been dry for quite a long time,” said Eva Scheller, a Caltech graduate student who was the lead author of the Science paper, “We see that most of Mars’ water was lost in the crust that forms what we call the moist minerals that contain water in its crystalline formations 3 billion years ago, which means that Mars was that dry planet as it is today for 3 billion years ago.”

Analysis of the chemical composition of water

Using the results of observations by Mars rovers and analyzing meteorites from the planet, the science team focused on hydrogen, the main component of water.

According to the statement issued by Caltech, “Water consists of an oxygen atom and two hydrogen atoms, but not all hydrogen atoms are equal. There are different types of hydrogen atoms, most of which contain only one proton in their nucleus, and they do not contain neutrons, which is the common and lighter isotope called Protium.”

There is also a small percentage of hydrogen atoms, which contain a proton and a neutron together, which makes them heavier, which is known as deuterium or heavy hydrogen. Because protium is the lightest, it is able to escape the planet’s gravitational pull into space compared to its heavier counterpart.

The water is still there

The researchers pointed out that much of the water did not actually leave the planet, but ended up in various minerals that contain water as part of its structure, especially the component of clay and sulfur.

Based on these results, the study authors say that there is a combination of two mechanisms that occurred to the water of Mars, namely the entrapment of water in the minerals of the planet’s crust and the loss of water in the atmosphere.

“Anytime you have a rock interacting with water, there is a series of complex chemical reactions that make up a wet mineral,” Scheller said.

“This process also occurs on planet Earth, for example in mud, but volcanoes on Earth recycle water back into the atmosphere. Since Mars does not contain tectonic plates, these changes are permanent,” she added.