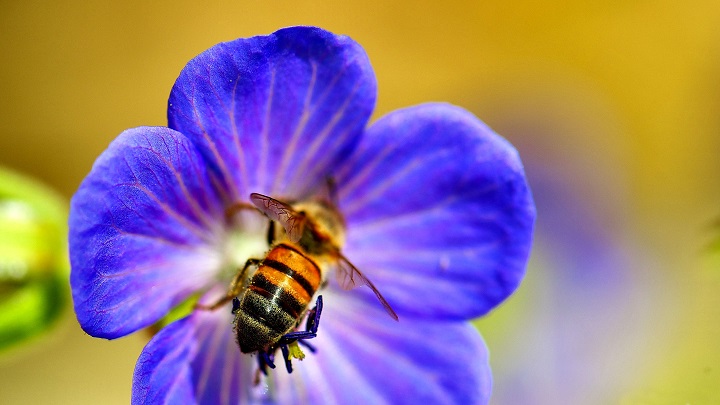 Blue is the desired color for many people, and the “blue flower” is considered a symbol of romantic longing. In nature, however, there are only a few plant species whose flowers contain blue color pigments.

One important factor is the great chemical effort required to produce blue dyes, however differing color perception of pollinators also plays a role.

For bees, all the shades of blue assume a more conspicuous share in the colorfulness of flowers than they do for the human eye.

But the problem posed by scientists – in contrast – is that the bee community is threatened with losing many of its members due to climate changes, urban expansion, and other factors that have caused the decline in the number of bees in nature.

A study has been published in Frontiers in Plant by an international, multidisciplinary research team led by Dr. Anke Jentsch of the University of Bayreuth.

According to the press release issued by the university on March 26th, scientists have found that only 7.5% of the flowers in the world can be seen by the human eye as blue, and it is especially the flowers that have been pollinated by insects or birds, While those that are pollinated by wind or rain “the blue” is not visible.

“This difference suggests that the color perception of pollinating organisms has significantly influenced the development of flower color over the course of evolution. It is therefore worth investigating the question of how flowers are perceived by their respective pollinators, and what interactions are triggered by this,” says Prof. Dr. Anke Jentsch, Professor of Disturbance Ecology at the University of Bayreuth.

Jentsch added that bees see colors on flowers in a different way than other pollinators, such as insects, for example, or even humans, and they love the color blue very much. “We seem to need to develop our studies in this area because seeing colors is a complex process that requires new exploratory research.”

Producers of the blue dye are few

Researchers have tried to find out the reasons why the number of pollinator species producing the blue color dye so little. But the answer was as complex as the process of producing the blue dye itself is complicated. Where the scientists found that its production in plants requires a chemical effort involving 6 chemical molecules responsible for producing colors, in addition to mineral ions.

This process is not easy as plants compete to bring in bees by producing this blue dye, especially in rugged and mountainous areas where there are not many pollinators, so the demand for bees is great.

The researchers gave an example of this in the climatically harsh European Alps and the Asian Himalayas as it does not allow pollinators from insects to live in it, so the demand for this increases for bees known for their resistance to difficult climatic conditions, and bees can only be attracted if the prominent color is blue.

From this standpoint, the scientists concluded that among the factors that cause the scarcity of blue flowers and put them at risk is land degradation, either by climate change, or by deforestation, or other causes such as the use of chemical pesticides in agriculture and overgrazing.