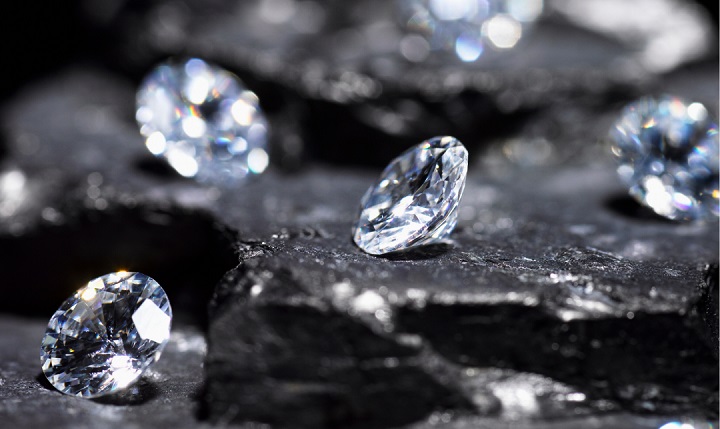 Diamonds that formed deep in the Earth’s mantle contain evidence of chemical reactions that occurred on the seafloor.

Probing these gems can help geoscientists understand how material is exchanged between the planet’s surface and its depths.

A recent study published in the journal Science Advances on March 31 confirms that serpentinite—a rock that forms from peridotite, the main rock type in Earth’s mantle, when water penetrates cracks in the ocean floor—can carry surface water as far as 700 kilometers deep by plate tectonic processes.

Researchers from the Gemological Institute of America in New York, the Carnegie Institute of Science in Washington, DC, and the Department of Geosciences at the University of Cape Town in South Africa participated in this study.

Not all diamonds are completely pure, some diamonds contain what we call “impurities,” which are fragments of other minerals that were trapped within the diamond stone during its formation.

These impurities are nothing but chemical elements that are found in those deep depths, where diamonds form as the element “perovskite calcium silicate” which is found at a depth of a kilometer below the surface of the earth. It is considered an unstable chemical element, meaning that it does not take a stable form, but rather transforms from one form to another.

The researchers found that this element reaches a steady state when it is trapped within the diamond structure.

Thus, to identify the chemical elements present in the Earth’s interior that are likely to have participated in one way or another in the formation of diamonds, the researchers studied two pieces of commercial streaked diamonds, and they found heavy isotopes of iron with values ​​that differ from them in the depths of the mantle, which assured them that these elements moved within a certain path through the depth of the mantle.

From the surface to the depths

In order for these elements to move from one place to another, they need an intermediate carrier element, and as a result of the subduction process of a tectonic plate under another, water and minerals move from the surface of the earth to its core.

Thus peridotite, which is present in the upper mantle layer, is exposed to seawater in the subduction zone, which leads to the formation of serpentinite and its other secondary materials with the heavy isotopic composition of iron.

Here, serpentinite, or the serpentine wavy mineral, is the main carrier in this process called “serpentine”.

Then some of these minerals that were formed in the subduction zone recently leak out to slide down through the crack between the tectonic plates, to move hundreds of kilometers to the ground there, where they can enter into the formation of diamonds and ascend with it back to the surface of the earth and tell the story of its journey to the depths and back Forth.

Geochemist Anat Shahar of the Carnegie Science Institute in the press release of the study expressed the importance of the findings, saying, “Our findings confirm a long-suspected pathway for deep-Earth recycling, allowing us to trace how minerals from the surface are drawn down into the mantle and create variability in its composition .”