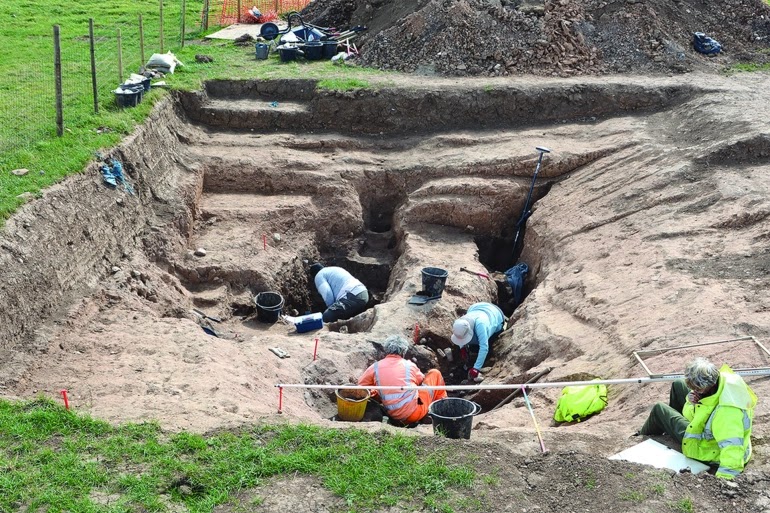 On the coast of Yorkshire, a team of archaeologists discovered the oldest salt-making complex in Western Europe, this discovery is expected to revolutionize the understanding of Britain’s prehistoric economy.

The research was conducted by a team from the Environmental Research Center of Scottish Universities, an institution run by the University of Glasgow, while a team of researchers from the University of Sheffield scientifically analyzed the remnants of salt on ceramic pots.

Scientists believe that this discovery proves that the British economy in prehistoric times is more developed than previously thought, and that it was based largely on raising livestock and extracting salt.

The Yorkshire discovery indicates that early farmers in Britain were able to produce food in large quantities, which helped accelerate population expansion and led to profound social and political transformations.

The archaeologists – excavating near Loftus, Yorkshire – have so far discovered three salt-making kilns and fragments of dozens of ceramic bowls used in the process.

Scientific tests on those fragments have shown very high levels of salt on their interior surfaces.

“This discovery changes our understanding of key aspects of the Neolithic economy,” said the director of the excavation, Dr Stephen Sherlock, an archaeologist working for Highways England.

Since there are no sources for the extraction of rock salt in Yorkshire, as well as the extraction of this type of salt does not require an oven; Scientists believe that the salt in that region was made from sea water.

According to the research team, the process probably had two stages: first, the Neolithic salt makers would have had to turn sea water into brine through natural evaporation, achieved through exposure to wind and sometimes the warmth of the sun; second, they would then have used kilns or hearths to turn the brine into salt crystals.

“Extracting salt from seawater is a complex, time-consuming and skillful process,” says David Lea-Wilson, one of Britain’s leading salt producers who runs a project to extract sea salt in a traditional way in North Wales. “Any ancient coastal civilization that had this technology could Inevitably expanding its economic activity significantly. “

The effects of Yorkshire reveal that the inhabitants of that region in the Neolithic period were able to increase their production of beef and dairy products, by preserving the meat using salt.

It was preferable in that period to slaughter most of the male cattle before reaching the first year. But without salt, there was no efficient way to preserve meat, especially since Britain and most of northern Europe are characterized by high humidity.

Therefore, the extraction of salt allowed the preservation of meat and its use as a source of food throughout the year, as well as liberating pastures for female cattle producing milk, and reducing the amounts of winter fodder.

The abundance of meat preserved with salt throughout the year enabled the preservation of the milk-producing female cattle and the increase in dairy products.

“Without salt, it would have been virtually impossible for these early agriculturalists to properly preserve their beef in the damp British climate,” says James Swift, a specialist in traditional meat preservation techniques.