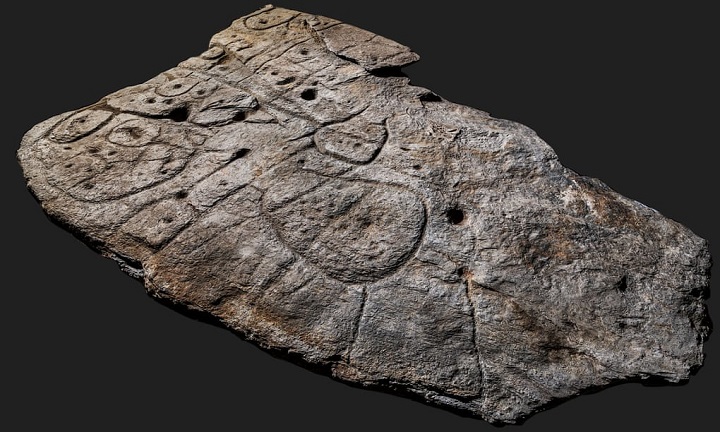 Archaeologists in France have uncovered a stone with 4,000-year-old etchings they believe may be the oldest three-dimensional map in Europe.

The board, called Saint-Bélec Slab, contains elements, including “repeated motifs linked to lines, which the team say make them believe it is a prehistoric map.”

The engraved surface indicates that the plate relief was intentionally placed in a three-dimensional pattern to represent the Odette River Valley, while several lines appear to depict the river network.

The team wrote in a statement that “a map is a drawing or blueprint of the surface of the earth or part of it.” They added: “The Saint-Bélec Slab actually bears the three most likely elements of a prehistoric cartographic representation: a monolithic composition with inscriptions identical in style and repetition of motifs.”

The stone slab was first reused in a burial structure during the end of the early Bronze Age.

The slab is believed to have been used as one of the walls of a stone tomb. “It’s engraved face was turned towards the inside of the tomb, but its ends were hidden,” the researchers said.

When it was first discovered in 1900, experts took it to the National Archeology Museum in 1924, then it was transferred to a castle in France, where it remained until it was found again in 2014.

In 2017, researchers from the French National Institute for Preventive Archaeological Research (Inrap), Bournemouth University and the University of Western Brittany laid their eyes on the carved slab.

Using high-resolution 3D surveys and photogrammetry of the stone slab, the team was able to confirm that the engravings matched 80% of the area around the 18-mile-long Odette River.

“This is probably the oldest map of a territory that has been identified,” Dr Clément Nicolas from Bournemouth University, one of the study’s authors

There are many such maps carved in stone around the world. In general, these are just explanations, but this is the first time that a map of an area has been depicted at a certain scale.

The stone slab is 2 meters x 1.5 meters long, and is said to shed light on a specific area. Dr. Nicholas explained: “An area was a territory belonging to a political entity that tightly controlled it in the early Bronze Age, and breaking it may indicate condemnation and de-sanctification.”

He added, “Perhaps it was a way to confirm the ownership of the area by a prince or king at that time,” noting that this stone slab is important because it highlights “cartographic knowledge.”