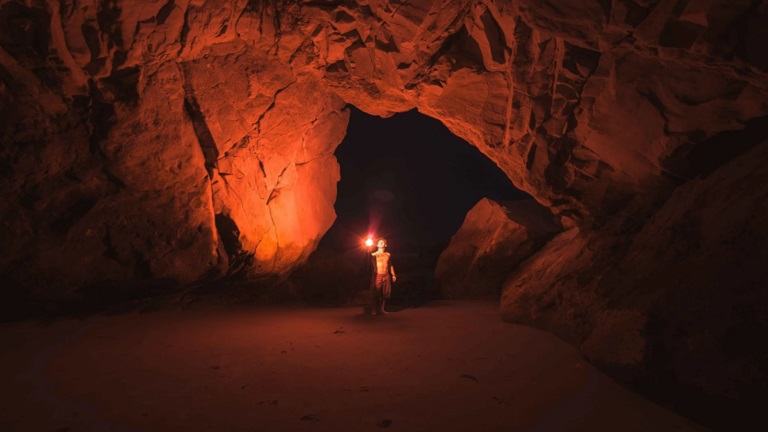 A strange rock in the shape of a boat was discovered in an Icelandic cave, the Vikings likely used it to stave off the end of the world 1,100 years ago, according to the researchers.

The rock was discovered in a cave near a volcano that erupted nearly 1,100 years ago at a time when Vikings recently colonized Iceland.

Within the cave there was a boat-shaped structure made from stone and a series of trade goods from the middle east, likely placed to try and avert Ragnarok, an end-times event where the world would be engulfed in flames.

Lead author Kevin Smith from Brown University said the eruption of the volcano would have been ‘unsettling’ and posing existential challenges to the new arrivals.

Even after Christianity became dominant in Iceland, people linked the cave to the end of the world, according to the study’s authors, who said that the historical record records it as “the place where Satan will appear on Judgment Day.”

They found that when the lava from the eruption began to cool down, the Vikings entered the cave and built a “boat-shaped structure.” 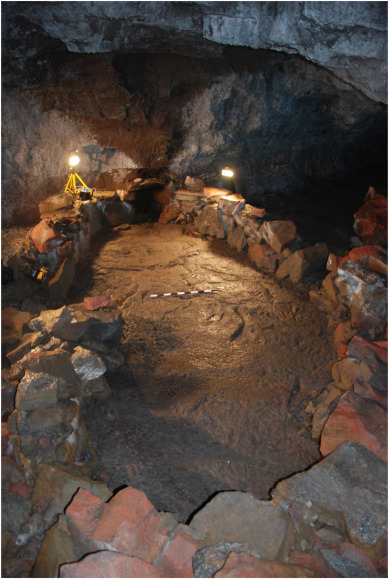 Once done, they would burn the animal bones in sacrifice, including the bones of sheep, goats, cattle and pigs.

The Vikings may have done so to avoid an eruption of another volcano, or they thought it signs of Ragnarok.

In addition to the rock boat formation, there were “commercial goods” inside the cave.

Archaeologists from Brown University found 63 beads inside the cave, including three from Iraq.

Smith, chief curator of the Haffenreffer Museum at Brown University, is leading the excavation. During the work Smith and colleagues found a mineral from Turkey called orpiment alongside the beads.

This mineral was used to decorate things like beads and other things, but very few examples of it have been found in Scandinavia.

They were all found inside Surtshellir Cave, which is located 30 feet below the Hullmundarhraun lava field located in western Iceland, about 40 miles from the settlement of Burgames.

Smith said finding this unusual mineral inside the cave was a “great surprise”, as it is rarely discovered in Scandinavia.

Historical records show that the Vikings linked the cave to Surtr, the Norse colossus who would cause the events leading up to Ragnarok.

‘The world would end when Surtr, an elemental being present at the world’s creation, would kill the last of the gods in the battle of Ragnarök and then engulf the world in flames,” the authors wrote in the Journal of Archaeological Science.

Study authors predict the rare middle eastern goods may also have been placed in the cave to appease Surtr in a bid to stop him from destroying the world, or maybe even to strength Freyr, the fertility god who fought Surtr according to mythology.

The team said that the last of the things that were deposited inside the stone in the shape of a boat, were a group of weights, including “one in the form of a cross.”