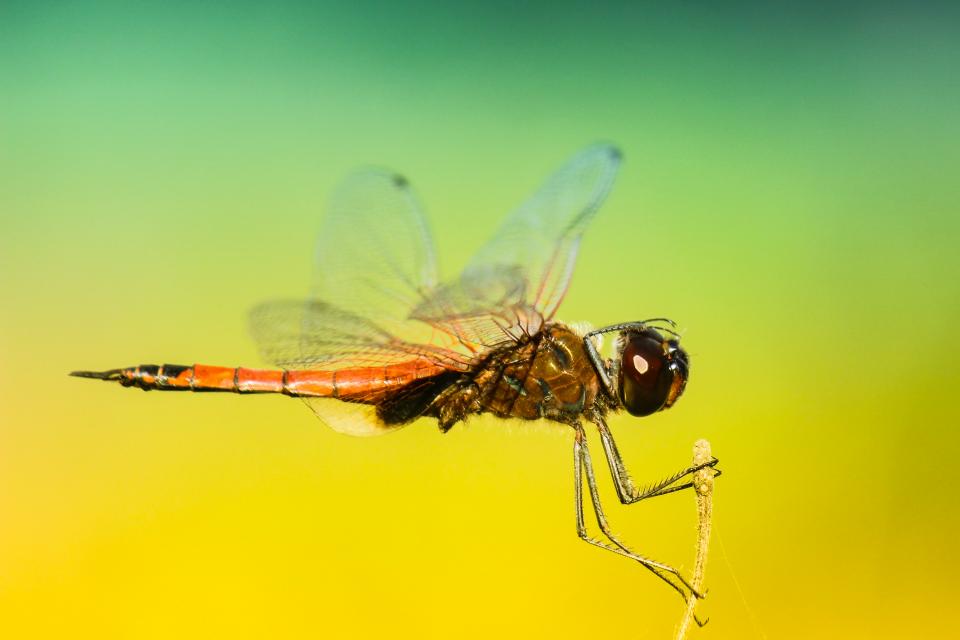 Flexible, light and amazingly strong, this is how researchers describe in a new scientific study the properties that make insect wings highly efficient in flight, and showed that combining these properties together could open new possibilities in the development of technical systems for aviation.

The team of researchers from the German “Kiel University” explained that the combination of flexible joints, mechanical seals and “torsion zones” makes insect wings effective and shock resistant.

By transferring these features to 3D-printed aircraft models, the authors of the study, published recently in the journal Advanced Science, were able to demonstrate the ability of the designed model to fly efficiently.

According to the university statement, researchers state that dragonflies, bees and similar creatures fly through the air using lightweight structures. But they are surprisingly powerful, with their wings usually only about 2% of the insects’ total mass.

At the same time it can withstand heavy loads and frequent collisions with obstacles such as flowers, leaves or twigs without major damage.

Insect wings consist of veins with a membrane extended between them, and the delicate connections that connect the veins enable the wings to bend under reduced load.

This combination provides the ability of the structure to withstand long-term loads; But with increased pressure, the movement of the wings stops by microscopic ripples located on the thin joints, and the researchers explained that these “sockets” support the wings against heavy loads.

Until now, human technology has not succeeded in creating materials that possess all these properties at the same time.

They usually acquire only one characteristic, either they are rigid to be able to withstand large loads, such as stable structural components in buildings, or they are flexible and resistant to breakage, especially in the event of collisions.

The researchers say that a better combination of both features will allow the development of technical structures that are more efficient and have the ability to adapt to what the surrounding conditions require.

But the methods that scientists and engineers previously developed to combine the two features remain complex, expensive, and thus not suitable for widespread use.

As part of their study, the researchers simulated these biomechanical elements in a model of produced aircraft, using 3D printing, measuring 8 centimeters in length and weighing 3.8 grams, and through this model they were able to demonstrate their technical efficiency and the potential they gained thanks to those characteristics.

During the experiments, the researchers equipped the wings with functionally symmetric systems with the function of delicate joints, plugs, and twisted regions of insects’ wings.

They proved, through their tests on the model, that wings with features inspired by dynamic elements survive collisions, while conventional aircraft models were destroyed.

In addition, scientists have tested many modified models, in which they omit one of the three basic features (flexibility, lightness and strength), and prove that all of them are necessary to ensure the amazing efficiency found in insect wings.

According to the researchers, the ability to convert the biological features of insect wings into technical ones allows the development of a wide range of applications. An interesting aspect is that the structural elements in the wings operate independently without additional power required.

This could help build technical systems that adapt independently to extreme or unpredictable conditions in environments where humans cannot directly and directly intervene, such as spaceflight, the authors say.