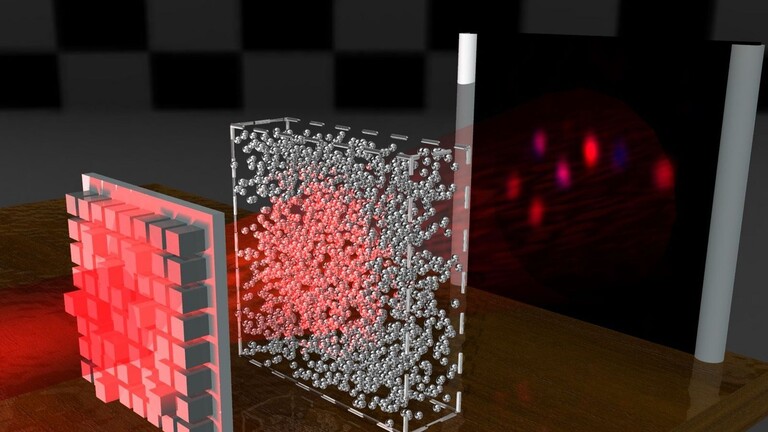 Scientists have found a way to make solid objects “invisible” in a strange way, by making light waves pass through opaque materials as if they don’t exist at all.

The reason that objects are visible are because of the scattering of light waves, bouncing from a light source onto an item and then into the human eye.

However, research from TU Wien and Utrecht University have been able to calculate a specific variety of light wave that could penetrate an object. While one might think that all light waves are the same, this is not the case.

Professor Stefan Rotter from the Institute of Theoretical Physics at TU Wien said in a statement: “Each of these light wave patterns is changed and deflected in a very specific way when you send it through a disordered medium.”

The execution of this is very challenging, and precise. In an experiment Professor Rotter and Professor Allard Mosk, at Utrecht University, used a layer of opaque zinc oxide powder – randomly arranged nanoparticles – and calculated exactly how light is scattered by the powder, and how it would have been scattered if the powder was not there at all.

With this knowledge, the researchers found that a certain type of light waves (“scattering-invariant light modes”) were recorded by a detector on the other side of the powder in exactly the same pattern, albeit slightly weaker than when they were sent.

Moreover, there is a theoretically unlimited number of light waves. This means that although it is difficult to calculate, it can be found.

This new development could be of great benefit to imaging procedures in biomedical applications. “One aspect we are very excited about is the fact that the light fields we introduced in our work not only seem to be special in the output field patterns they produce behind the object, but also inside of it,” said Professor Rotter.

He added “The feature that these fields resemble those in free space could be very useful for looking deep inside highly scattering materials that are typically very challenging to work with”.

Professor Rotter added that there is still research to be done, because biological systems are full of movement, such as blood flowing through the body. This makes it difficult to calculate the patterns needed to pass the light through the object, as measurements must be made more quickly than the timescale of the motion itself.

For now, the breakthrough could help scientists who want to examine smaller structures, such as cells, and Professor Rotter believes it is only a matter of time before measuring tools become fast and cheaper enough to open up the possibilities for more complex applications.