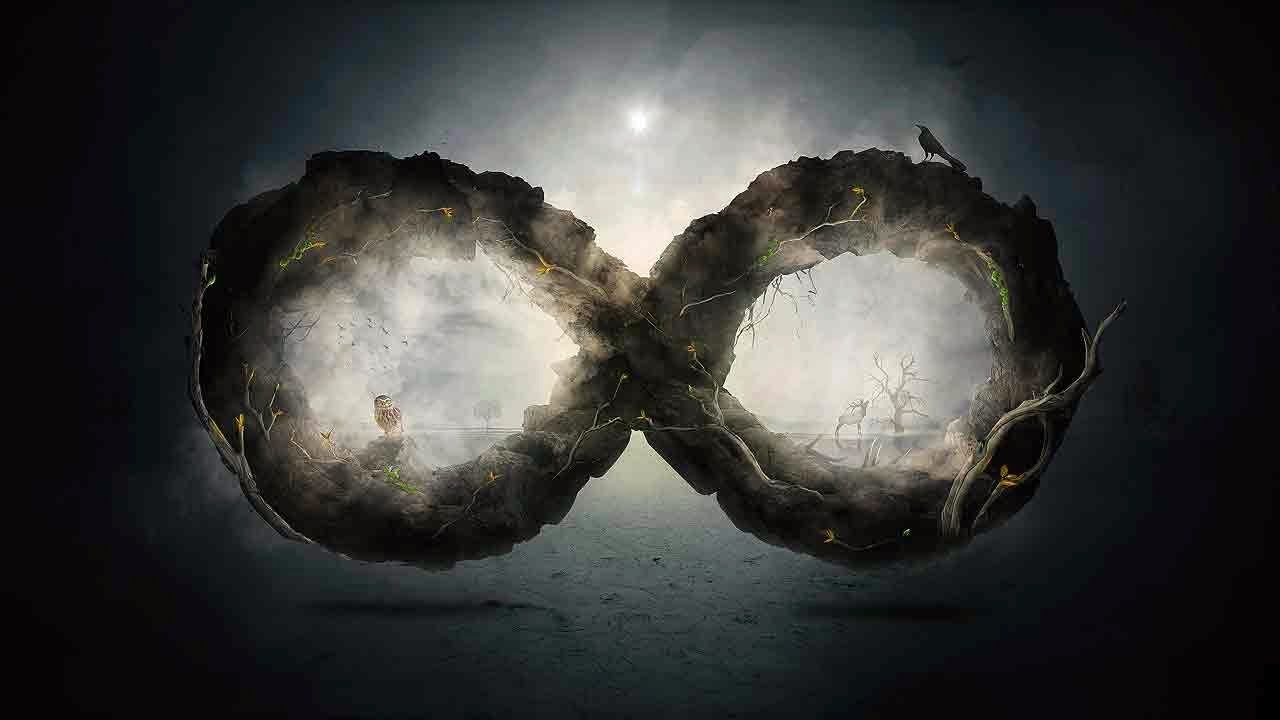 During the months of May/June, perhaps the most widespread scientific news among people was related to the fact that NASA had finally been able to discover the existence of a universe parallel to the one in which we live, but time in it is going backward.

The news was already exaggerated, as it was based on recent results from “ANITA“, a smart experiment aimed at using the entire continent of Antarctica as a laboratory! The high-energy cosmic neutrinos are supposed to interact with the continent’s huge ice sheet, causing a specific pattern of radio pulses to be reflected that can be picked up by the antennas suspended in a helium balloon flying about 37 km in the icy sky.

A neutrino is a subatomic particle so small that a trillion of it will pass through one of your fingers within a second, but this particle is weakly interacting in such a way that only one “neutrino” can interact with your body during your entire lifetime. They are particles without charge and do not carry – almost – Any mass, for this reason, catching a neutrino was always like catching a ghost, and it always required smart tricks – like “ANITA” – to catch the high-energy type of it.

In 2018, ANITA experiment began to receive anomalous radio signals than expected. It seemed to be caused by particles that passed through the Earth to Antarctica and then to ANITA, and were not reflected from the Antarctic ice sheet. This opened the door to a set of interpretations. Which includes saying that it just has to do with the nature of the ice itself in Antarctica, but some have suggested that it may be evidence of something else that lies far beyond our imaginations.

At that point, a hypothesis that is topped by a research paper issued at about the same time enters the playing field. This hypothesis proposes that the universe we know is more like a mirror image of another universe, and both universes started from the same point, which is the Big Bang. 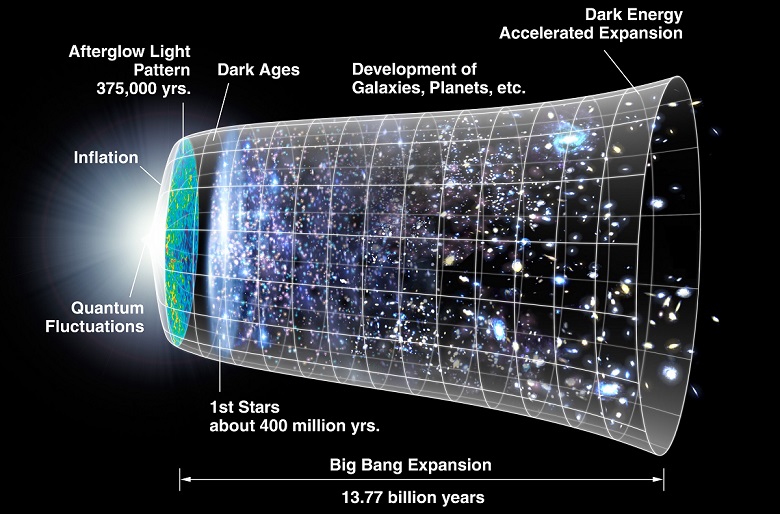 To understand this, let’s start with the most widely accepted model of cosmology today(called the Lambda-CDM model), which assumes that our universe started from the Big Bang. We notice this when we look at the universe and see that it is expanding at rates Therefore, if we imagine that the universe is a movie now being shown, and we want to return the viewer back for a period of about 13.8 billion years, then this expansion will be reversed to reach one point from which the entire universe begins.

We don’t yet know much about this point, and we can’t see anything that happened during it, or during the first 400 years of the universe’s history, when it was fully dark. As soon as the first cosmic atoms were formed, the first photons of light were released, but we only assume that they exist based on a lot of irrefutable evidence.

Here this new paradigm asks: “Why don’t we keep rotating the film back even after the Big Bang?” Of course, this is not just an idea that suddenly appeared in the brains of some physicists, but it is their habit to follow mathematical equations any way to take them, and the equations usually start from the problems facing physicists in cosmology.

Here we say that the cube “breaks the rotational symmetry”, and the sphere is rotational symmetry. In particle physics there are also several types of symmetry (but of course with large differences, the sphere only for approximation), the majority of physicists assume that this type is similar to CPT – Symmetry, it should not be broken, At that point, the assumption is that in order to preserve symmetry, we must assume the existence of a universe other than ours located in its background.

But this assumption does not avoid the Big Bang, but continues to resolve it directly through the Big Bang to what happened before it. From that point of view, the explosion is only the point at which the direction of the universe is reversed. In other words, on the other side of the Big Bang there is a space-time – a spatiotemporal fabric – similar to the one we live in but opposite to it in everything.

For example, time on this other side will appear, to us, as if it is running backward and not forward, as well as everything on this other side will appear inverted as if it is an image in the mirror, but note that it appears as such for this only, as for the inhabitants of this other cosmic side – if They are – nothing looks wrong, everything is normal, but if they looked to our side, they would see it as a mirror image of them. In other words, both universes will meet at the moment of the Big Bang, so that each side imagines that the other happened after its past!

At that point you might ask: What is the relationship of Anita’s experience with all this inverted universe? The answer is that the new model of the inverted universe assumes the emergence of a new type of neutrino particle that was not previously found in the physical model of particle physics that we know today, and these particles may be what the Anita experiment observed.

The problem is not the hypothesis that the results of Anita’s experiments relate to the inverse universe. but, when it comes to speaking that its results are a confirmation or even an indication of the existence of this mirror universe, while it is – at its most – just a guess, and even with our discovery of those particles, it remains speculation. because it can also indicate other things.

However, the hypothesis of the existence of a universe opposite to ours in which we live already exists. Indeed, a research team from the University of Oxford had suggested a similar hypothesis several years ago, in a study published in the journal “Physics Letters B”, which says that the Big Bang was not, as we imagine it, the starting point of both time and space, but it was the moment when the direction of space changed.

Like its predecessor, this new model does not avoid the Big Bang, but rather continues its solutions directly through the Big Bang to what happened before it, thus it does not present any new principles, nor does it present any modifications to Einstein’s theory of general relativity that explains the evolution of the universe precisely, and it only builds itself – like its predecessor as well – on a problem to be solved, this time it’s called the Horizon Problem.

The other side of the Big Bang

Since we know that very early in the history of the universe, the speed of the cosmic expansion was greater than the speed of light, which means that there were elementary particles that appeared immediately after the Big Bang but did not have the opportunity to meet each other at all, to understand this, imagine that we have a cup of hot water and a cup of water Cold we pushed them away from each other as soon as they form, here one of them will remain cold and the other hot for a while, but when we leave them together for some time, and then move them to the right and left, they will be approximately the same temperature.

At that point, two ways of answering appear, the first one has to do with post-Big Bang physics, this solution envisions that something happened in the first moments of the universe’s life and caused this impossible connection. Perhaps the space itself was different from what we know now, and the speed of light may have been greater As for the second way, it says that, it seems, the Big Bang was not the beginning of time in the first place. Rather, those particles possessed, in some way, a time before the Big Bang to mix with each other, and then the Big Bang came.

All of these hypotheses did not emerge out of the blue, but rather are solutions to problems that already exist in the current models that explain the universe. Take, for example, that research paper that sparked controversy in the research community in 2017 when it referred to the possibility of another universe colliding with our universe at a very early stage in its history,

The hypothesis of that paper relied on a region in the microwave background radiation that the current models can only explain with an idea borrowed from the “bubble universes” hypothesis that came as a result of the Eternal Inflation Hypothesis.

But these assumptions about other universes face a fundamental problem, which is our ability to confirm them experimentally. The question of “Are there really other universes?” Difficult to answer in our current scientific situation, and we may never be able to answer it, but who knows? We might.

All we need now is to continue working to develop more accurate tools and clearer and more acceptable models of denial so that we can – perhaps one day – confirm that idea.

Until that moment comes, we cannot deal with these models as reality on the ground. We are still in a land that is closer to imagination, but it is a fantasy worth contemplating and working on. Perhaps one day we will answer our most pressing questions: What is dark energy? What is dark matter? What happened at the moment of the Big Bang itself? What time? What is life who are we?