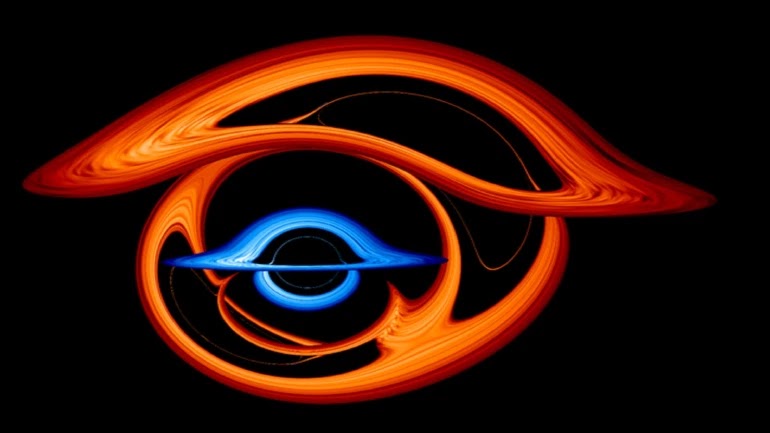 A pair of black holes millions of times the Sun’s mass, orbiting around each other in a stunning dance,  the black holes distort and redirect light emanating from the maelstrom of hot gas – called an accretion disk – that surrounds each one.

Viewed from near the orbital plane, each accretion disk takes on a characteristic double-humped look. But as one passes in front of the other, the gravity of the foreground black hole transforms its partner into a rapidly changing sequence of arcs. These distortions play out as light from both disks navigates the tangled fabric of space and time near the black holes.

“We’re seeing two supermassive black holes, a larger one with 200 million solar masses and a smaller companion weighing half as much,” said Jeremy Schnittman, the astrophysicist who created the visualization. “These are the kinds of black hole binary systems where we think both members could maintain accretion disks lasting millions of years.”

The accretion disks have different colors, red and blue, to make it easier to track the light sources, but the choice also reflects reality.

For these masses, both accretion disks would actually emit most of their light in the UV, with the blue disk reaching a slightly higher temperature.

Phenomena like these help scientists visualize the astonishing results of the supergravity lens phenomenon.

The accretion disks look noticeably brighter on one side. Gravitational distortion alters the paths of light coming from different parts of the disks, producing the warped image.

The gravitational pull of a front (blue) black hole causes the largest (red) hole to appear as a set of crooked and twisted arcs. These aberrations occur when light passes through the intertwining fabric of space and time near the two giant holes.

“A striking aspect of this new visualization is the self-similar nature of the images produced by gravitational lensing,” Schnittman explained. “Zooming into each black hole reveals multiple, increasingly distorted images of its partner.”

Schnittman created the visualization by computing the path taken by light rays from the accretion disks as they made their way through the warped space-time around the black holes.

On a modern desktop computer, the calculations needed to make the movie frames would have taken about a decade. So Schnittman teamed up with Goddard data scientist Brian P. Powell to use the Discover supercomputer at the NASA Center for Climate Simulation. Using just 2% of Discover’s 129,000 processors, these computations took about a day.

Scientists expect that in the foreseeable future, they will be able to observe the gravitational waves – ripples in the fabric of time and space – that arise when two giant black holes orbit each other in spiral paths, like the two that Schnittman photographed in this video.