A giant mosasaur from the end of the Cretaceous period in Morocco that could have reached up to eight metres long is the third new species to be described from the region in less than a year, bringing the total number of species up to at least 13.

The high diversity of the fauna shows how mosasaurs, giant marine lizards related to snakes and Komodo dragons, thrived in the final million years of the Cretaceous period before they, and most of all species on Earth, were wiped out by the impact of a giant asteroid 66 million years ago. 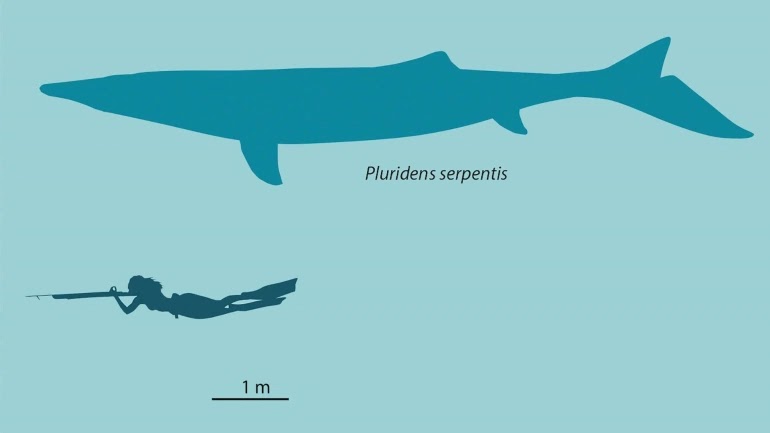 The new species, named Pluridens serpentis, had long, slender jaws with over a hundred sharp, fanglike teeth to grab small prey like fish and squid. Compared to related species, it had small eyes, suggesting poor vision. But the snout had dozens of openings for nerves, hinting at the ability to hunt by sensing water movements and changes in pressure. These nerves may have been sensitive to tiny variations in water pressure, an adaptation seen in sea snakes.

“Typically, when animals evolve small eyes, it’s because they’re relying more heavily on other senses,” said Dr Nick Longrich, senior lecturer at the Milner Centre for Evolution at the University of Bath, who led the study.

The fact that Pluridens had so many nerves in the face may mean that it was using changes in water pressure to detect animals in low-light conditions, either at night or in deep, dark water. Mosasaurs may also have had other senses at their disposal.

“If it wasn’t using the eyes, then it’s very likely that it was using the tongue to hunt, like a snake,” he said. “Many aquatic snakes and lizards – sea snakes, filesnakes, water monitors- flick their forked tongues underwater, using chemical cues to track their prey. Mosasaurs would have resembled whales and dolphins, so it’s tempting to assume they lived like them.

The third type discovered in the region

“This new discovery confirms that Moroccan phosphate is the standard for studying the diversity of life at this crucial time in the history of life on earth,” Noureddine Jalil a researcher at the Paleontology Research Center in France

The Moroccan mosasaurs were wildly diverse. Some had small teeth for seizing fish and squid, others evolved blunt teeth to crush crustaceans, clams, and ammonites, while others had teeth designed to cut or tear apart other marine animals – including other mosasaurs.

Pluridens brings the number of mosasaurs known from latest Cretaceous of Morocco up to 13, but the researchers suggest it’s unlikely to be the last new species.

Dr Longrich said: “The diversity in these fossils is just astonishing. Far from declining in diversity, the mosasaurs seem to be peaking just before they went extinct.