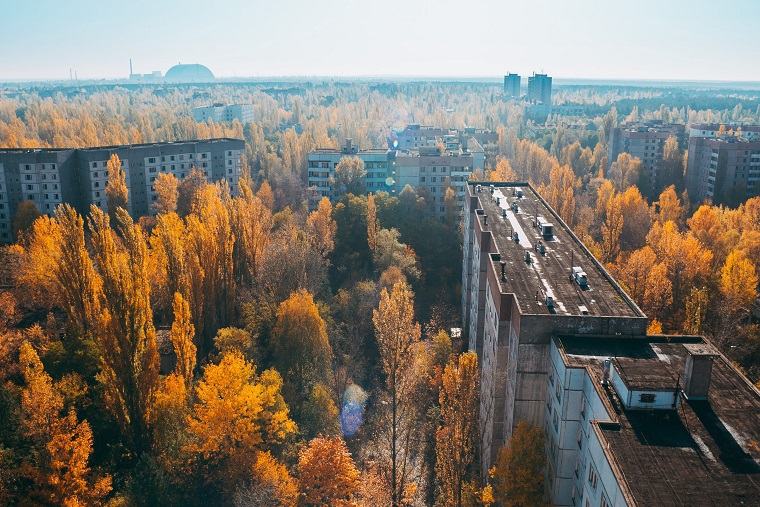 Widely hailed as the worst nuclear accident to ever occur, the 1986 Chernobyl disaster happened during a safety test at the Chernobyl Nuclear Power Plant in what was then Soviet Ukraine.

While the disaster killed fewer than 100 people in the immediate aftermath, the UN and WHO reported in 2005 that there had been 4,000 Chernobyl-related deaths. while Radiation scientists Fairlie & Sumner provide some of highest estimates, predicting between 30,000-60,000 deaths.

Around 117,000 people were evacuated from the immediate area, primarily from Pripyat, a city built to serve the power plant. An exclusion zone was established, with borders set up around an area of 30km radius from the remains of the plant.

The Exclusion Zone now covers an area of around 2,800 sq km and is, perhaps unsurprisingly, one of the most radioactively contaminated areas in the world.

Over 400 hectares of pine trees were killed in the immediate aftermath of the disaster, and the surrounding flora and fauna – as well as all nearby water sources – were highly contaminated too.

But now, nearly 35 years on from the incident, the Exclusion Zone seems to have undergone a rewilding transformation.

Despite the extensive, immediate damage to the ecosystem of the Exclusion Zone, the biodiversity of the area has increased rapidly over the past three decades. Rare species like the lynx and the vulnerable European bison have seen a resurgence.

In the Belarussian part of the exclusion zone, researchers have found that boar, elk, and roe deer populations boomed in the 10 years following the disaster.

“Wolf numbers are seven times higher, likely due to much lower hunting pressure in the Chernobyl Exclusion Zone,” says James Smith from the University of Portsmouth, who has conducted research on wildlife in the area.

“Our camera trap surveys in Ukraine have photographed Eurasian lynx, brown bear, black storks and European bison. Ukrainian and Belarussian researchers have recorded hundreds of plant and animal species in the zone, including more than 60 rare species,” explains Nick Beresford from the UK Centre for Ecology and Hydrology.

Species like the Przewalski’s horse, a rare and endangered horse native to Central Asia, have even been deliberately released into the area as part of conservation efforts.

It’s still unknown how healthy these animals are, with many scientists concerned that these species will still be suffering negatively from the effects of radiation exposure.

However, Scientists analysed grains including wheat, rye, oats and barley and found concentrations of radioactive isotopes – strontium 90 and/or caesium 137 – above Ukraine’s official safe limits in almost half of samples.

But the population boom of mammals especially in the area is still seen as a good sign. Despite the mass contamination, Beresford, along with other researchers, believes “the overall effect was positive” for the wildlife in the Exclusion Zone.

“The burden brought by radiation at Chernobyl is less severe than the benefits reaped from humans leaving the area,” explains plant biochemistry expert Stuart Thompson, who adds that the zone “supports more life than before.”

When will humans be able to return?

The area has accidentally become one of Europe’s largest nature preserves, serving as a clear testament to the detrimental impact of humans on wildlife.

There are ongoing arguments about whether the Exclusion Zone will ever be inhabitable for humans again.

Ukraine’s state authorities said in 2011 that the area could be occupied within 320 years, while Greenpeace and Chernobyl director Ihor Gramotkin both said more recently that it would likely be upwards of 20,000 years.

The long-term success of the region’s ecological recovery won’t be fully understood for many years, but there are already clear lessons to be learnt.