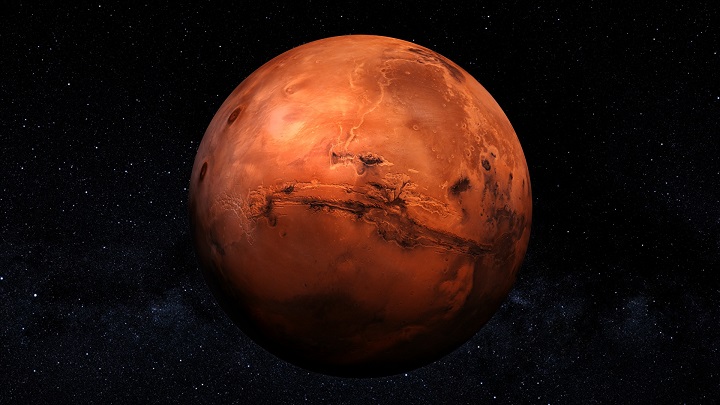 Recent studies confirm that life on Mars is indeed possible, not on its surface, but deep inside its Earth.

Although this red planet is still exciting scientists’ dreams, space programs continue to focus increasingly on the moon.

Many scientists agree that the Red Planet once contained oceans of liquid water, but it evaporated in space about 3.5 billion years ago, which means that life if it continued there. It has little chance of developing, and it may yet be microscopic.

To solve the mystery of life on Mars, one must first think about the sun, because the impossibility of life as we know it on the surface of this planet is due to the sun’s rays, especially ultraviolet, which can sterilize every atom on its land, especially since the perchlorate salts found there has the irritating property of increasing the germicidal effects of UV rays.

Although there are scientists who expect nothing more than to find some fossils there, others hope that there will still be life under the surface of the Red Planet.

The study, published in the journal Astrobiology, looked at the chemical composition of Martian meteorites — rocks blasted off of the surface of Mars that eventually landed on Earth. The analysis determined that those rocks, if in consistent contact with water, would produce the chemical energy needed to support microbial communities similar to those that survive in the unlit depths of the Earth. Because these meteorites may be representative of vast swaths of the Martian crust, the findings suggest that much of the Mars subsurface could be habitable.

“The big implication here for subsurface exploration science is that wherever you have groundwater on Mars, there’s a good chance that you have enough chemical energy to support subsurface microbial life,” said Jesse Tarnas, a postdoctoral researcher at NASA’s Jet Propulsion Laboratory who led the study while completing his Ph.D. at Brown University.

“We don’t know whether life ever got started beneath the surface of Mars, but if it did, we think there would be ample energy there to sustain it right up to today.”

In recent decades, scientists have discovered that Earth’s depths are home to a vast biome that exists largely separated from the world above. Lacking sunlight, these creatures survive using the byproducts of chemical reactions produced when rocks come into contact with water.

One of those reactions is radiolysis, which occurs when radioactive elements within rocks react with water trapped in pore and fracture space.

The reaction breaks water molecules into their constituent elements, hydrogen and oxygen. The liberated hydrogen is dissolved in the remaining groundwater, while minerals like pyrite (fool’s gold) soak up free oxygen to form sulfate minerals.

Microbes can ingest the dissolved hydrogen as fuel and use the oxygen preserved in the sulfates to “burn” that fuel.

In addition, many specialists believe that there are groundwater, albeit very salty, all over Mars today, as data sent by the European Mars Express probe revealed the existence of at least 4 lakes under the planet’s south pole. Water plus energy (which are essential components of life) is present in the interior of the Red Planet.

“The subsurface is one of the frontiers in Mars exploration,” said Jack Mustard, Professor in the Department of Earth, Environmental and Planetary Sciences “We’ve investigated the atmosphere, mapped the surface with different wavelengths of light and landed on the surface in half-a-dozen places, and that work continues to tell us so much about the planet’s past. But if we want to think about the possibility of present-day life, the subsurface is absolutely going to be where the action is.”

The existence of Mars may be an argument against humans going to this planet or at least a call to take many precautions, as called by Nathalie Cabrol, director of the Carl Sagan Research Center at the Carl Sagan Center – SETI, the organization that specifically aims to search for life beyond planet Earth, she thinks it is still possible to go and collect samples before human presence irreversibly altered the martian environment.

Cabrol has conducted research on “Mars isotopes” in terrestrial environments that are close to what is found on the Red Planet, and concluded that Mars’ life is the result of 4 billion years of evolution, and any creature alive today will have plenty of time to adapt to a range of local conditions including those not on Earth. “Initial life on Mars is capable of spreading and colonizing the world over,” she said.

Humans will soon go to Mars, but Cabrol calls for strict decontamination methods to protect potential Martian life samples, because “Mars will be polluted as soon as we set foot on it.”