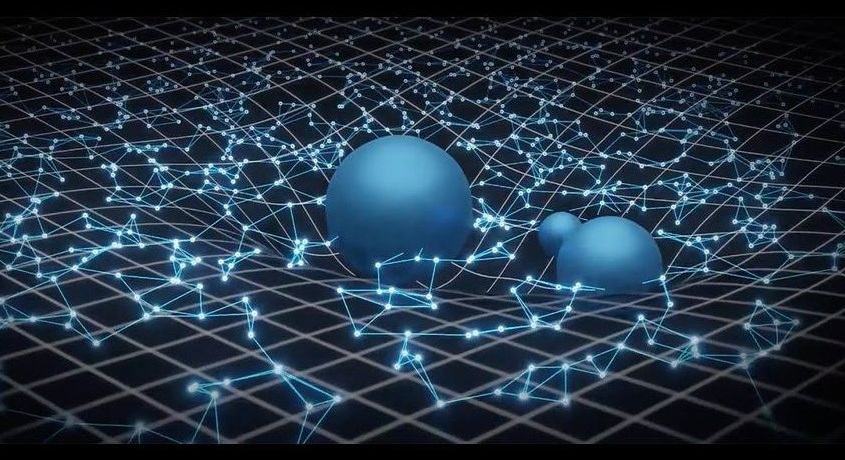 As far as physicists have been able to determine, nature speaks two mutually incomprehensible languages: one for gravity and one for everything else.

Curves in the fabric of space-time tell planets and people which way to fall, while all the other forces spring from quantum particles.

Albert Einstein first spoke of gravity in terms of bends in space-time in his general theory of relativity. Most theorists assume that gravity actually pushes us around through particles, called gravitons, but attempts to rewrite Einstein’s theory using quantum rules have generally produced nonsense. The rift between the forces runs deep, and a full unification of the two grammars seems remote.

In recent years, however, a baffling translation tool known as the “double copy” has proved surprisingly adept at turning certain gravitational entities, such as gravitons and black holes, into dramatically simpler quantum equivalents.

“There’s a schism in our picture of the world, and this is bridging that gap,” said Leron Borsten, a physicist at the Dublin Institute for Advanced Studies.

While this unproven mathematical relationship between gravity and the quantum forces has no clear physical interpretation, it’s allowing physicists to pull off nearly impossible gravitational calculations and hints at a common foundation underlying all the forces.

Gravity Versus the Rest

On one side of the fundamental physics divide stand the electromagnetic force, the weak force and the strong force. Each of these forces comes with its own particle carrier (or carriers) and some quality that the particle responds to. Electromagnetism, for instance, uses photons to push around particles that possess charge, while the strong force is conveyed by gluons that act on particles with a property called color.

Physicists can describe any event involving these forces as a sequence of particles scattering off each other. The event might start with two particles approaching each other, and end with two particles flying away. There are, in principle, infinitely many interactions that can happen in between. But theorists have learned how to make frighteningly accurate predictions by prioritizing the simplest, most likely sequences.

On the other side of the divide stands gravity, which rebels against this kind of treatment.

Gravitons react to themselves, generating looping, Escher-like equations. They also proliferate with a promiscuity that would make a bunny blush. When gravitons mingle, any number of them can emerge, complicating the prioritization scheme used for other forces. Just writing down the formulas for simple gravitational affairs is a slog.

But the double copy procedure serves as an apparent back door.

Zvi Bern and Lance Dixon, later joined by Carrasco and Henrik Johansson, developed the procedure in the 2000s, advancing older work in string theory, a candidate quantum theory of gravity. In string theory, O-shaped loops representing gravitons act like pairs of S-shaped strings corresponding to carriers of other forces. The researchers found that the relationship holds for point particles too, not just hypothetical strings.

Encouraged by the double copy’s success in dealing with gravitons — the smallest possible ripples in space-time — Donal O’Connell of the University of Edinburgh and Ricardo Monteiro and Chris White at Queen Mary University of London have used it to reimagine the most extreme trick in gravity’s repertoire.

The researchers split the black hole’s warped space-time into two pieces: flat space-time and a term representing a strong deviation from flatness. Then, Monteiro explained, they asked themselves whether the deviation term is the double copy of something.

Stationary and spinning black holes alike act as if they are double copies of charged particles, the group reported in 2014. “You reduce this complicated thing to something unbelievably simple,” O’Connell said.

Black holes are not literally two copies of electrons. But their mathematical relationship is loosening the stranglehold that Einstein’s relativity theory exerts on the gravitational realm. “My secret master plan is to show that you can compute anything using the double copy that you can compute with the classical Einstein equations,” O’Connell said.

Recently, double copy practitioners have jumped into gravitational wave astronomy, the new discipline that detects distant objects and events by means of the ripples they kick up in space-time. In just a few years, Bern and his colleagues have used the shortcut to make gravitational wave predictions that already rival state-of-the-art calculations from general relativity.

The double copy has revealed a hidden, simpler side of gravity, but even theorists who have devoted their careers to exploring the relationship wonder where the simplicity is coming from.

“Is it telling us something important and primal, or is it some trick?” said Carrasco.

Researchers note that electromagnetism, the weak force and the strong force each follow directly from a specific kind of symmetry — a change that doesn’t change anything overall (the way rotating a square by 90 degrees gives us back the same square).

Intriguingly, when rewritten with the double copy, gravity appears to obey a symmetry similar to those of the three quantum forces. It’s “like there’s a fourth, mother symmetry,” O’Connell said, “a symmetry underlying the whole lot.”

The path to a complete theory of quantum gravity is long and uncertain, and the double copy might not lead all the way there. But its ability to cut through the verbiage that fills calculations gives theorists hope that the two dueling formulations of modern physics aren’t the final story. “This is a striking example that there are languages to learn that aren’t manifest in the way we traditionally talk about theories,” Carrasco said.