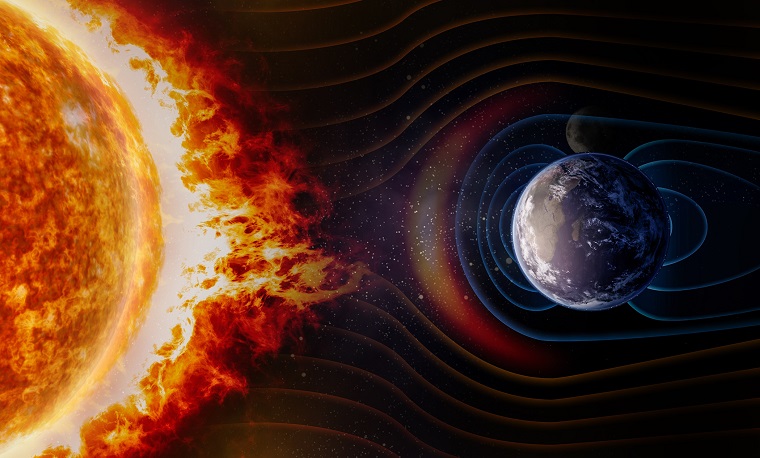 A few days ago, millions of tons of super-heated gas shot off from the surface of the sun and hurtled 90 million miles toward Earth.

In a report published by the American Bloomberg, writer Brian Sullivan said that the explosion, called coronal mass ejection, wasn’t strong according to the space weather scale, but when this gas collided with the Earth’s magnetic field, it caused the strongest geomagnetic storm ever seen since years.

Although it did not leave much turmoil this time, the storm was a reminder that the sun had woken up from its years of slumber.

While invisible and harmless to anyone on the Earth’s surface, the geomagnetic waves unleashed by solar storms can cripple power grids, jam radio communications, bathe airline crews in dangerous levels of radiation and knock critical satellites off kilter.

During the past year, the sun began a new 11-year cycle, and as it approaches its peak in 2025, the specter of a powerful space weather that threatens to cause havoc for humans grows in a world that has become more dependent on technology since the last big storms struck 17 years ago.

A recent study suggested hardening the grid could lead to $27 billion worth of benefits to the U.S. power industry.

“It is still remarkable to me the number of people, companies, who think space weather is Hollywood fiction,” said Caitlin Durkovich, a special assistant to U.S. President Joe Biden and senior director of resilience and response in the National Security Council, during a talk at a solar-weather conference last month.

In fact, this risk is not hypothetical. In 2017, a solar storm brought wireless radios to a standstill as Hurricane Irma-grade 5 ravaged the Caribbean.

In 2015, solar storms shattered global positioning systems in the northeastern United States, which is of particular concern today as self-driving cars are already in place. In addition, airline pilots are at risk of developing cataracts in solar storms.

To avoid such a disaster, the administration of former President Barack Obama devised a strategy to raise awareness of the dangers of massive solar storms, and to assess the risks they cause.

Scientists are debating what can be done to protect vulnerable parts of the planet’s infrastructure from the effects of solar storms. In fact, some steps can enhance resistance to hazards, such as using non-magnetic steel in transformers and installing more flow shields to the grid.

That would go a long way toward helping utilities prepare for shortages and making sure there are paths to back up their systems in case they lose power. In weeks, a new model developed by the University of Michigan will come online to help improve Earth-bound forecasting.

Mark Prouse, Deputy Director of Business, Energy and Industrial Strategy, said that the UK national grid is building its stock of backup transformers and conducting regular exercises to deal with major phenomena generated by space weather.

Over the past 15 years, the United States and the United Kingdom have established space weather forecasting centers that provide daily forecasts of the hazards that the sun may pose to airlines, power grids, satellite owners, and anyone else who might be threatened by solar flares.

While Earth-bound observers can see explosive storms erupt on the sun, they can’t tell the true nature of the threat — exactly how potent it is — until the blast reaches a set of satellites 1 million miles from the planet. At that point, there is only 60 to 90 minutes until it hits Earth.

Just as utilities can prepare for a severe thunderstorm by staging repair workers nearby, similar precautions could be taken ahead of a solar storm, according to Mark Olson, the reliability assessment manager for the North America Electric Reliability Corp., a non-profit answerable to the U.S. and Canadian governments.