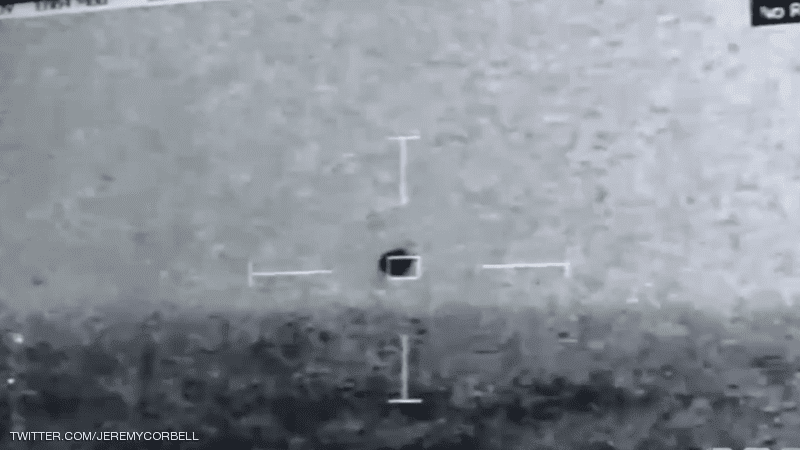 A video filmed by the US Navy and recently leaked by a documentary filmmaker showed an unknown flying object disappearing into the Pacific waters off California.

The video was taken by a US Navy aircraft in July 2019, and recorded at the combat information center of the USS Omaha, according to director Jeremy Corbel.

In the video, a sphere appears to be flying over the water for a few minutes near the city of “San Diego” before disappearing.

The US Department of Defense confirmed that the clip was recorded by navy personnel, and said that its review will be carried out by the Pentagon’s UAPTF, which was established last year “to gain an insight into the nature and origins” of these objects.

The video was published a few days before the broadcast of “60 Minutes”, on the “CBS” network, an interview with two former Navy pilots, in which they talked about being sent to investigate “several strange air vehicles” that fell 80,000 feet in less than Again, in an accident that also occurred off San Diego in 2004.

One of the pilots, Captain Dave Farafor, told the “60 Minutes” program that personnel had found a “small white object” moving over the water before it disappeared.

A few seconds later, the warship USS Princeton, to which Farafor belonged, said that the object appeared again on its radar 60 miles away.

A lengthy story in the “New Yorker” magazine entitled “How the Pentagon began to deal seriously with UFOs” last month discussed an article by journalist Leslie Kane, in the “New York Times” four years ago, stating that the Pentagon spent millions of dollars on a program to identify threats.

In order to check unidentified aircraft were moving at extremely high speeds, without clear indications of thrust.