For the first time, astronomers have determined the shape of the heliosphere, mapping in 3D the boundary that marks the end of the solar wind for our star in space.

This discovery -recently published in The Astrophysical Journal- could help us better understand the environment of the Solar System, and how it interacts with interstellar space.

“Physics models have theorized this boundary for years,” said astronomer Dan Reisenfeld of Los Alamos National Laboratory. “But this is the first time we’ve actually been able to measure it and make a three-dimensional map of it.”

Theoretically, the edge of the heliosphere is not unknown to scientists, as they actually realized its existence when the Voyager 1 and Voyager 2 probes crossed this edge on their way to the outer space of the solar system.

The edge of the heliosphere is an interesting place for scientists, as the solar wind loses its speed. These winds are released by our star in the form of streams of charged particles in all directions at supersonic speed.

But as it penetrates into space, it gradually loses its strength so that it is no longer sufficient to push the pressure of the currents of charged particles coming from interstellar space. At the edge of the heliosphere, the solar wind stops completely.

Interstellar space contains a low density of atoms, but it is dominated by interstellar cosmic winds that are sufficient to repel the advance of the solar wind.

Despite the consensus of scientists on the existence of this limit, its form has been the subject of debate and disagreement among them.

Scientists know that they cannot accurately survey the edge of the heliosphere because of the enormous distance that separates us from it.

The Voyagers 1 and 2 probes were at distances of 121 and 119 AU (an AU equals 150 million km) from the Sun respectively when they reached this edge, and it took decades to get there. It is about 4 times the distance between the Sun and Neptune, the farthest planet from it.

But that doesn’t mean we can’t take a look. Reisenfeld and his team used data from NASA’s Earth-orbiting Interstellar Boundary Explorer (IBEX) satellite, an observatory that measures particles flung from the heliosheath, the very outer region of the heliosphere.

Decoding this signal to determine the edge of the heliosphere is somewhat similar to the way a bat uses sound waves to map its physical surroundings. The signal strength and the time interval between transmitting and receiving can reveal the shape and distance of obstacles.

According to the lead author, the IBEX satellite used the same method to capture the signal of “active neutral atoms” returning after two to 6 years, depending on the energy of these atoms and the direction of the satellite’s “look” through the heliosphere.

Using this time difference and data from an entire solar cycle between 2009 and 2019, the researchers were able to create a 3-D map of the heliosphere. 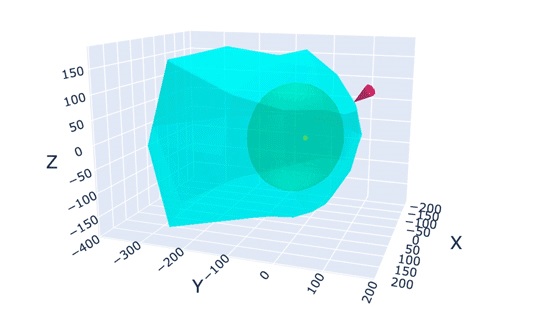 Although the created map is still a bit rough, according to the researchers, it does reveal interesting things about the heliosphere. Its shape, for example, is now known, and is somewhat similar to that of a comet with a tail of at least 350 AU.

In contrast, the minimum radial distance is between 110 and 120 astronomical units, consistent with what was recorded by the Voyager 1 and 2 probes. While the heliosphere extends at high latitudes between 150 and 175 AU.

The IBEX mission will continue until at least 2025. The interstellar acceleration and mapping probe is scheduled to begin in 2025, starting when IBEX has stopped. The team hopes that these two missions will provide more data to help determine the shape of the heliosphere more precisely.