From the moment that American billionaire Jeff Bezos announced that he would go to space with his brother on his company’s first flight, “Blue Origin”, the price of a single seat on this tourist trip has risen to more than 3 million dollars at famous auction platforms such as “RR Auction”.

“I want to go on this flight because it’s a thing I wanted to do all my life. It’s an adventure. It’s a big deal for me,” Bezos says in the brief video.

Of course, Bezos’ latest announcement is understandable, he’s not doing it just for the sake of getting into space; Rather, to underscore how safe his company promises to be a very special, and entirely new, class of space-goers, the wealthy tourists of course.

In an interview several years ago, Bezos said that when he was a young man he wanted to build space hotels, amusement parks and colonies of 2-3 million people, in orbit around the Earth, adding that tourism would be an initial movement to learn the mechanisms of evacuating humans to space, and the planet becomes a park one day.

Based on his dreams, the company “Blue Origin” was founded in 2000 in Kent, Washington state, and began developing missile propulsion systems and launch vehicles first, and five years later, work began on the first New Shepard missile.

The New Shepard is a “vertical-takeoff, vertical-landing” vehicle, which means that it is like SpaceX’s rockets, can land and can be reused more than 25 times, according to the company.

Trials of the New Shepard’s prototype engine began in 2006, and it is entirely company-produced. Four years later, the engine was fundamentally developed, and then the ability to fly the missile was tested in full (with propulsion unit and driving capsule) in 2015.

It is interesting that the vast majority of those trials were successful from the first time, and the first manned flight of the vehicle is expected to take off on June 20, which is also its first tourist flight.

This is consistent with the policy of “Jeff Bezos” in the slow progress of the company, it builds strong alliances on the economic and political scales, and gives the theoretical part more time to form a heavy base of work; Therefore, the results are accelerating in the end, depending on the previous equipment.

Overall, Blue Origin’s goal was to lower the cost of space travel so that humans could better continue to explore the solar system.

Bezos believes that this can be achieved by starting with the form of tourist and commercial trips, which in turn help support the science of this domain. 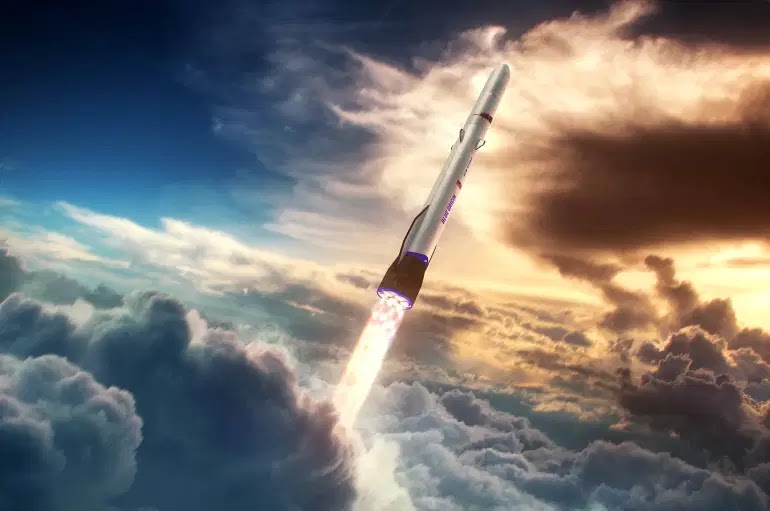 For this reason, the small “New Shepard” rocket was only the beginning. The company plans to launch the new “New Glenn” rocket in 2022, and work began on it in 2012, and its high-level illustrations and specifications were revealed 4 years later.

The first “New Glenn” will be a two-stage missile, with a diameter of 7 meters and a length of about 90 meters, and its first stage is powered by 7 BE-4 engines designed and manufactured by Blue Origin.

After the success of New Glenn in the two stages, it will be followed by the construction of the three-stage “New Glenn” rocket, which will be about 100 meters long, and it is the Blue Origin company’s tool for launching into the solar system, the Moon as a start, and then Mars.