Scientists have solved the decades-long mystery over how Jupiter produces regular-as-clockwork auroras of X-ray light.

The X-rays are part of the gigantic planet’s bursts of visible and invisible light triggered by charged ion particles interacting with its atmosphere.

A similar phenomenon occurs on Earth, which creates the aurora borealis – also known as the Northern Lights – that is seen during the colder months in the northernmost countries. 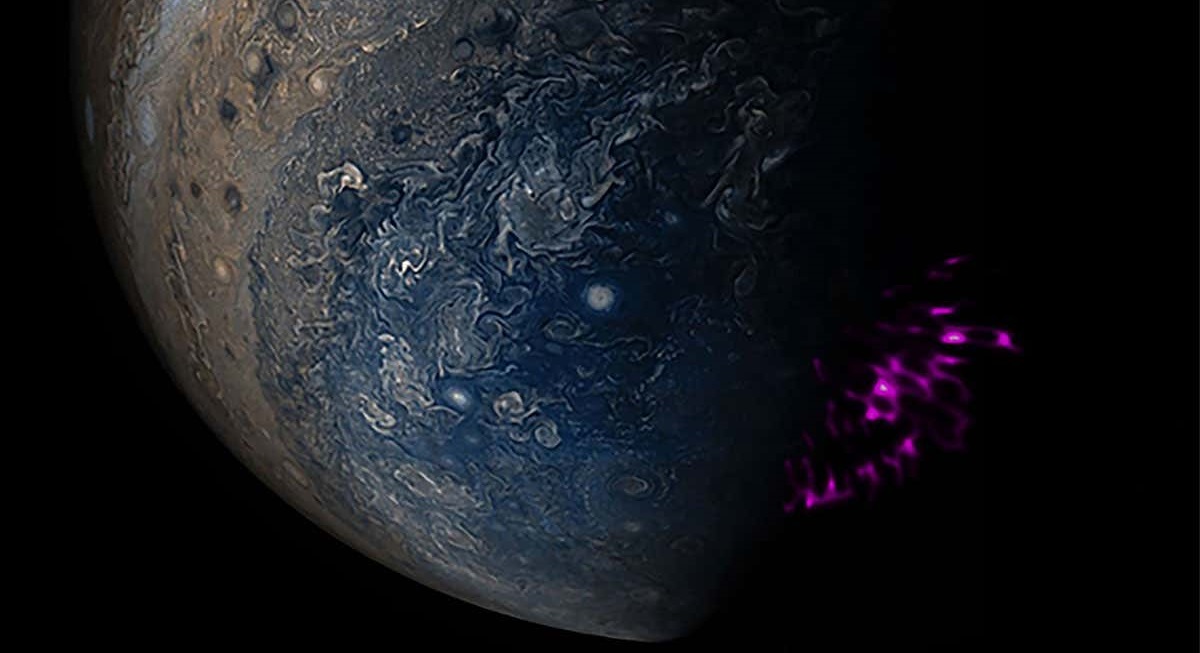 The so-called King of Planets is crowned with the most powerful auroras in the Solar System, permanently circling both its poles.

Because they glow only in non-visible wavelengths, we can’t see them with the naked eye, so it wasn’t until just 40 years ago that they were discovered. Ever since, scientists have wondered how these auroras produce periodic bursts of X-radiation.

Scientists found that the X-rays were triggered by regular vibrations in Jupiter’s magnetic field lines that surround the planet in vertical loops that connect from its north pole to its south pole.

These vibrations create waves of plasma – ionised gas – that send heavy ion particles “surfing” along the magnetic field lines until they smash into the planet’s atmosphere, and release colossal amounts of energy in the form of X-rays.

“We have seen Jupiter producing X-ray aurora for four decades, but we didn’t know how this happened. We only knew they were produced when ions crashed into the planet’s atmosphere,” explained astrophysicist William Dunn of University College London in the UK.

“Now we know these ions are transported by plasma waves – an explanation that has not been proposed before, even though a similar process produces Earth’s own aurora. It could, therefore, be a universal phenomenon, present across many different environments in space.”

Here on Earth, auroras are generated by particles blowing in from the Sun. They collide with Earth’s magnetic field, which sends charged particles like protons and electrons whizzing along the magnetic field lines towards the poles, where they rain down on Earth’s upper atmosphere and collide with atmospheric molecules. The resulting ionization of these molecules generates the stunning dancing lights.

On Jupiter, there are a few differences. The auroras are constant and permanent, as previously noted; that’s because the particles are not solar, but from the Jovian moon Io, the most volcanic world in the Solar System.

It’s constantly belching out sulfur dioxide, which is immediately stripped via a complex gravitational interaction with the planet, becoming ionized and forming a plasma torus around Jupiter.

And then there’s the X-ray pulses. To figure out how they were being generated, the research team studied the planet, using simultaneous observations from Juno and XMM-Newton, taken on 16-17 July 2017, for a total of 26 hours. During this time, Jupiter was letting off an X-ray burst roughly every 27 minutes.

The team concluded that compressions in Jupiter’s magnetic field are creating waves of oxygen and sulfur ions that spiral along the magnetic field lines towards Jupiter’s poles, where they rain down, collide with the atmosphere, and generate bursts of X-ray light.

These waves are called electromagnetic ion cyclotron (or EMIC) waves, and they have also been linked to flickering auroras here on Earth.

It is, at this point, unclear what drives the compressions in Jupiter’s magnetic field. It could be the influence of the solar wind, circulation of heavy materials within the Jovian magnetosphere, or surface waves on the magnetopause, the outer boundary between the magnetosphere and the surrounding plasma.

The research has been published in Science Advances.