One of the largest, most unstable glaciers in Antarctica is sliding into the ocean. That’s due, in large part, to hidden rivers of warm water that lubricate its underbelly, more so now than ever in the era of climate change. Now, researchers know what those unseen channels look like.

By using equipment that can measure fluctuations in gravity, radar and seismic waves, scientists were able to map precisely where these glacier-melting channels cut through the deep seabed.

Ice losses from Thwaites Glacier in West Antarctica are currently responsible for roughly 4 % of the global sea-level rise. This figure could increase, since virtually no other ice stream in the Antarctic is changing as dramatically as the massive Thwaites Glacier.

Until recently, experts attributed these changes to climate change and the fact that the glacier rests on the seafloor in many places, and aso comes into contact with warm water masses. But there is also a third, and until now, difficult to constrain influencing factor.

In a new study, German and British researchers have shown that there is a conspicuously large amount of heat from Earth’s interior beneath the ice, which has likely affected the sliding behavior of the ice masses for millions of years. 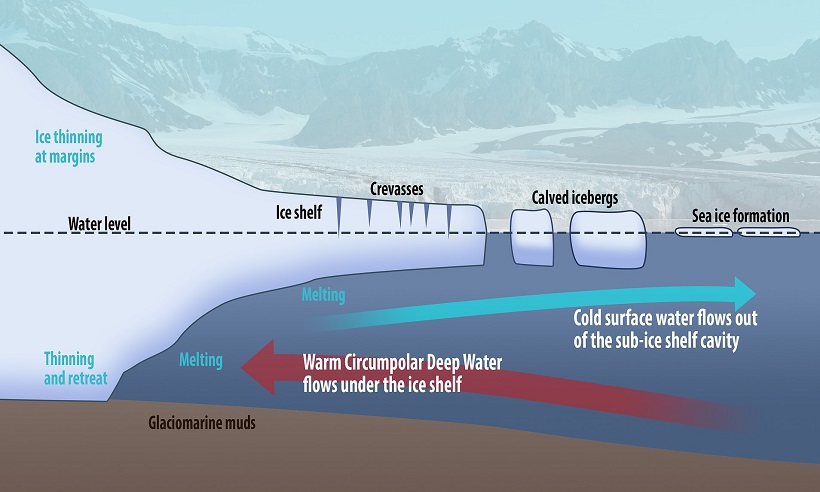 This substantial geothermal heat flow, in turn, is due to the fact that the glacier lies in a tectonic trench, where the Earth’s crust is significantly thinner than it is in neighboring East Antarctica. A new study outlining this was published today in the Nature online journal Communications Earth & Environment.

Unlike East Antarctica, West Antarctica is a geologically young region. In addition, it doesn’t consist of a large contiguous land mass, where the Earth’s crust is up to 40 kilometers thick, but instead is made up of several small and relatively thin crustal blocks that are separated from each other by a so-called trench system or rift system.

In many of the trenches in this system, the Earth’s crust is only 17 to 25 kilometers thick, and as a result a large portion of the ground lies one to two kilometers below sea level.

Geothermal heat from the ground

Based on their data, the geophysicists are unable to put a figure on the extent to which the rising geothermal heat warms the bottom of the glacier. “The temperature on the underside of the glacier is dependent on a number of factors—for example whether the ground consists of compact, solid rock, or of meters of water-saturated sediment. Water conducts the rising heat very efficiently. But it can also transport heat energy away before it can reach the bottom of the glacier,” explains co-author and AWI geophysicist Dr. Karsten Gohl.

Nevertheless, the heat flow could be a crucial factor that needs to be considered when it comes to the future of Thwaites Glacier. According to Gohl, “large amounts of geothermal heat can, for example, lead to the bottom of the glacier bed no longer freezing completely or to a constant film of water forming on its surface.

Both of which would result in the ice masses sliding more easily over the ground. If, in addition, the braking effect of the ice shelf is lost, as can currently be observed in West Antarctica, the glacier’s flow could accelerate considerably due to the increased geothermal heat.”

The danger of flooding coastal areas

Since the 1980s, Thwaites has lost an estimated 540 billion metric tons of ice, which alone contributed to an annual sea level rise of 4% at the time.

However, the rate of ice loss in glaciers has accelerated remarkably in the past three decades, due in part to the hidden rivers of relatively warm seawater that cut through the bottom of the glacier, as well as the effects of accelerating climate change that has warmed the air and ocean.

According to a report published on Live Science in September 2020, If the entire glacier were to collapse into the ocean, sea levels would increase by about a whopping 25 inches (65 centimeters).

This dramatic increase would devastate current coastlines, so scientists are trying to understand the dynamics driving Thwaites’ seaward motion and how fast these processes are accelerating the melt.

As part of an international research project, researchers are seeking to extract field samples in the form of ice cores that penetrate the bottom of the Thwaites glacier, which can help them know how much time is left for the Doomsday glacier to collapse.